The holly and the ivy ... and the mistletoe

Ward off evil, contemplate Christ and get the look of love with these ancient Irish sprigs 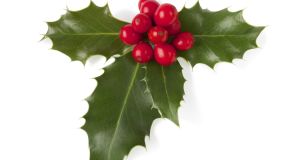 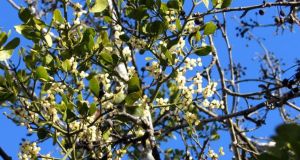 Mistletoe: a symbol of love and friendship in Norse mythology

Sprigs of holly were the preferred Christmas decorations alongside Christmas trees adorned with lights and tinsel in many Irish homes before the globalised trade in Christmas decorations took off. Holly was considered a “noble” of the woods alongside oak, ash, hazel, yew, pine and wild apple in the ancient Irish tree lists and is still found in the under storey or shrub layer in most native woodlands. Only female holly trees can bear fruit which is why you can often see berryless (male) holly trees at this time of year.

Holly, ivy and other greenery such as mistletoe were originally used in pre-Christian times to ward off evil spirits and celebrate new growth during the winter solstice festivals. Christians then used holly to symbolise the crown of thorns that Jesus wore when he was crucified and its red berries to symbolise his spilt blood.

Mistletoe was a symbol of love and friendship in Norse mythology, which is where the practice of kissing under the mistletoe comes from.