Stuff we don’t do any more

Drinking at lunchtime, using a bureau de change, writing a letter and using a phone box were everyday activities 20 years ago. What’s it like living as an Irishman from the not-so-distant past? 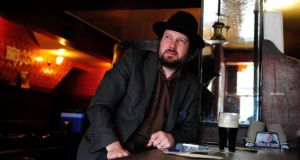 Wherever he lays his hat: Patrick Freyne with his lunchtime pint – and camera, letter and rupiahs – at Mulligans. Photograph: Aidan Crawley

‘According to historians, there are loads of things we used to do in the old days that we don’t do any longer,” says my editor, reading from the internet with surprise. “Why don’t you spend a day doing things like a man from the past? Maybe pick 10 activities or tasks.”

“Hiding from sabre-toothed tigers?” I suggest. “Carving rudimentary tools out of flint? Thinking fire is magic and being terrified of storms?”

Fair enough. I’m secretly pleased, actually. Much as I wanted to wear a fur bikini like Raquel Welch in One Million Years BC, reliving the recent past will be more cathartic.

You see, there are many things that as a child in the 1980s I learned to associate with adulthood: going to a bureau de change, writing a letter, getting photos developed, wearing a hat. Because I don’t get to do these things in my adult life I feel that my development has been stunted. I’m certain that if I spend a day writing about these things I’ll finally become a real grown-up.

“That’s a lot of pressure to put on one article,” says my editor. (I hadn’t realised I was saying the previous paragraph out loud.) “But sure give it a try.” I do.

1: Change money at a bureau de change
At Fexco currency conversion I can’t get lire for a forthcoming trip to Italy because of something called the euro. Things have changed for currency exchanges, Ciaran Murrin, the teller, says, because of the euro and the advent of omnipresent bank machines. Customers nowadays tend to be tourists. I panic and buy 100,000 Indonesian rupiahs (see photograph).

2: Wear a hat
My grandad had three hats: one for Mass, one for day-to-day wear and one for gardening. But I don’t even have one hat. Mary Hamill at the Hat Shop in Stephen’s Green Shopping Centre says that the writing was on the wall for universal hat use the day JFK went hatless. “Although they are coming back,” she says.

Youngsters have been buying “paper boy hats” because of The Great Gatsby and pork-pie hats like the one worn by Walter White in Breaking Bad. I always thought I’d wear hats as an adult. So I buy a trilby (“like in Mad Men”). I head into the street, where I feel people are looking at me with new respect. “You’re wearing a hat indoors like a hipster,” says a colleague back at the office, a little less respectfully.

3: Develop some photos
“Few people come to get their film developed any more,” says Sebastian Rutkowski, who works at Dublin Camera Exchange. Indeed, the only film cameras that seem to be on the market are cheap disposable ones. (I buy one.) The people who develop film with them, says Rutkowski, are students who like the look of out-of-date film, older people who have old cameras and don’t want to change, and tourists who’ve lost their real cameras.

The problem with digital photographs, he says, is that “people just snap away. They take loads of pictures and don’t think about composition.” I take some selfies in my new hat. (Pics not back at time of writing).

4: Write a letter
I decide to see to my correspondence, like men of letters did in days of yore. First I procure some writing paper, a pen and envelopes from Pat Martin at the Pen Corner, the specialist shop in Dublin. “People still send letters,” he says. “A lot of them would be older people. But letters are a lot more personal, I think.”

I check Twitter, where I see that our arts editor, @laurencemackin, has put an approving comment about a band. “Dear @laurencemackin,” I write. “So true! Yours sincerely, Patrick Freyne. ”

I stick a 60c stamp with a woodpecker on it on the envelope. I also see that my friend @bren has made a funny joke. “Dear @bren,” I write. “LOL! Yours sincerely, Patrick Freyne.” His stamp has a fox on it.

I take the letters to St Andrew Street post office, where Nicole Kavanagh tells me they don’t get many nonbusiness letters these days. “You’re maybe the 15th person to come up with a personal letter today,” she says. And I feel superior.

5: Buy a newspaper from a street vendor
Newspapers are like websites made of paper where the links don’t work. There is, believe it or not, a newspaper version of the article you are now reading.

Austin Cregan has been selling newspapers on O’Connell Street for 50 years. “My sympathies,” he says, when I introduce myself as an Irish Times reporter. “I’ve only had one new [regular] customer in the last few years, and the rest are dying off,” he says.

6: Have a midday straightener
At Mulligans pub Gary Cusack, the barman, can’t supply me with a Guinness at room temperature – “It’s been some time since anyone did that” – but he pours me a very nice pint all the same.

He recalls when people regularly had a few pints in the middle of the day. “Sure half their work was done here. Journalists would take people to be interviewed here. They’d get their stories here . . . The Irish Press people were here so often, people rang here when they were looking for them. They called it the branch office. It’s kind of frowned on now,” he says, referring to drinking in the day. I nod tipsily as light streams through the door.

7: Have an afternoon nap
It’s only since the Industrial Revolution that we’ve had our current, factory-friendly sleeping patterns. After a midday pint this seems unjust and probably unhealthy.

One Irish Times journalist from the golden age of newspapers is said to have had a comfortable cubby hole with a pillow, a blanket and reading lamp beneath some desks. I attempt to do something similar in the airy new offices. It’s cramped and uncomfortable underneath these desks. There’s nowhere to hide in the modern work environment. I find the hat is a useful way of blocking light from my eyes.

8: Use Tippex
Groggy after my uncomfortable nap, I begin to write my article. In college, 20 years ago, Tippex was my friend. My handwritten essays were more Tippex than paper. Sadly, according to our IT department, Tippex is bad for computer screens.

9: Dictate my article over the phone
In the old pre-internet days journalists would ring the office and dictate their articles to copytakers. “According to historians,” I begin saying into the receiver. “There are lots of things we used to do . . .”

“Patrick, this is ridiculous. I’m at the next desk,” says my editor.

10: Use a payphone
Nobody uses payphones any more (not for their intended purpose, anyway). This is why so many of them aren’t working and smell of wee. I find a working one and am surprised to find the minimum payment is €2. This is way more than it was in olden times.

“According to historians,” I begin into the receiver. “There are lots of things we used to do . . .” My editor sighs.