From goats to music festivals, the bank holiday weekend has something for everybody 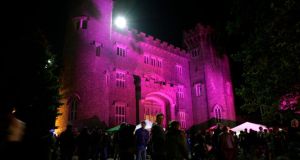 Castlepalooza music and arts festival takes place until Sunday on the grounds of Charleville Castle in Tullamore, Co Offaly

Breffni 3 Province Challenge takes place in Arva, Co Cavan, today with a half marathon, 10km and 5km fun runs, and 100km and 25km cycles. Funds raised go to cancer research and care organisations. The half marathon will go through the three counties of Cavan, Leitrim and Longford, and the three provinces of Ulster, Connacht and Leinster. runireland.com

Castlepalooza music and arts festival takes place until tomorrow in the grounds of Charleville Castle, Tullamore, Co Offaly. In its 10th year, the festival has added new stages, and act include Hercules and Love Affair, Of Montreal, Aeroplane, Late Nite Tuff Guy, Alex Metric, Jape, Fight Like Apes, Benny Smiles, Florence Olivier, I Have a Tribe and Cave Ghosts. Sunday tickets (no camping) are still available for €50. castlepalooza.com

Dublin’s international piano festival and summer academy ends this weekend. Pianomania, a family concert, takes place at Dublin City Gallery, The Hugh Lane, on Parnell Square, at 1pm today, with up to four pianists playing at once. Suggested donation of €10; children free. pianofestival.ie

Spraoi International Festival of Street Arts, in Waterford, is now in its 23rd year. Expect to see hundreds of costumed performers, floats, fire, music and special effects at tomorrow’s parade, which begins at 9.30pm from Johnstown Industrial Estate to the city quay. spraoi.com