Are you being served? The column that looks at stock, service and style around Ireland 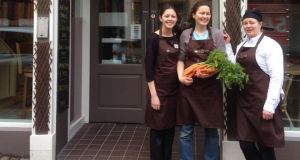 The Happiness Trap on Townhall Street

The word Enniskillen triggers the same unfortunate associations as do the names Lockerbie, Warrington, Oklahoma City and other innocent sites of man’s inhumanity, yet the connection is only in our minds. All of these places have long ago dusted themselves off and moved on.

Enniskillen’s attention has returned to the River Erne that has defined it since prehistory. The outdoor pursuit shop Home, Field & Stream (hfs-online.com) sells equipment to enrich our experience of the aqueous wilderness that stretches into Upper and Lower Lough Erne – a realm of waterfowl, wild moorland and impenetrable forest.

The shelves are crammed with counterweighted catapults, carp maggots, decoy ducks and hats with camouflage leaves sewn on to them. As I approach the counter, a man spends €1,600 on night-vision gear. Some of the staff have worked here for 30 years, which is what gives them the advantage over internet bargain stores, according to the owner, Trevor Kingston.

“We have customers from France, Germany and Britain who won’t buy equipment anywhere else,” he says.

While shooting and hooking animals along the Erne is the focus of Home, Field &Stream, it was concern for the welfare of animals that led Pat O’Doherty to buy Inishcorkish Island on Upper Lough Erne and set a herd of Saddleback pigs wild there.

Two generations of butchering animals for profit left him with existential qualms about his exploitation of the animal kingdom. To redress the balance, he set about creating a pig paradise. Making bacon using traditional artisan curing techniques was an afterthought, but by now his famous Fermanagh Black Bacon (blackbacon.com) has eclipsed his other products. Soon there’ll be a stall in O’Doherty’s butchers selling bacon butties straight off the grill.

Existential qualms were the driver, too, for beautician Shauna Gallagher to establish her range of natural handmade skincare products. When she realised the leading salon brands were harmful to sensitive skin, she felt “disheartened and desperate. I explored the promise of natural products, many out of my price range, and the cheaper products, on closer inspection, were not actually all that natural. In order to claim that a product is natural or organic, it only needs to include 2 per cent of organic/natural ingredients. Horrified, I was determined to find a solution.”

She began making her own concoctions, which are on sale in her shop, Natures Inspiration (naturesinspiration.co.uk), in the old Buttermarket building in Enniskillen. The products are biodegradable, free of artificial colouring or fragrances, not tested on animals, and organic where possible.

For further dedication to organics and sustainability, check out Laura Ostereich’s The Happiness Trap cafe on Townhall Street, selling organic and vegetarian dishes and pastries influenced by Ostereich’s upbringing in the Swiss Alps. Manchán Magan