Selfie, word of 2013, sums up our age of narcissism 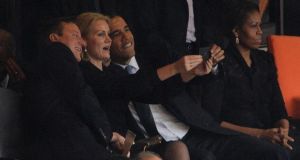 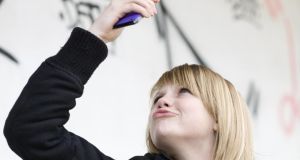 The selfie: a YouTube tutorial on the subject advises self-portraitists to hold their necks out, duck-like, angle their heads and lift the camera above their heads for that ‘baby-face look’. Photograph: Thinkstock 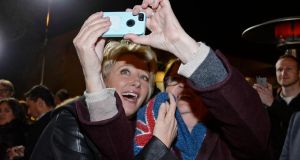 Cast member Emma Thompson (left) takes a selfie with a fan as she attends the film premiere of “Saving Mr Banks” at the Walt Disney Studios in Burbank, California, earlier this week. Photograph: Kevork Djansezian/Reuters

It is quite an art, the selfie. A YouTube tutorial on the subject with 1.5 million hits advises would-be smartphone self-portraitists to hold their necks out, duck-like, angle their heads and lift the camera above their heads for that “baby-face look”.

Selfies – self-portraits taken on smartphones and uploaded to social media – were recently declared the Oxford English Dictionary’s “word of 2013”, after its use shot up 17,000 per cent from last year.

I wish they had gone for “twerking” or “showrooming” (checking out an item in a store before buying it online) or any one of their other choices.

But I suppose it had to be selfie. It’s hard to think of a more appropriate – or more depressing – symbol of the kind of society we have become. We are living an age of narcissism, an age in which only our best, most attractive, most carefully constructed selves are presented to the world. The selfie is a natural extension of Facebook and Twitter, the next step in the
fine-tuning of our branded selves. Along with photosharing apps such as Instagram, it offers the intoxicating promise that no one need ever see the unfiltered you again.

Social snapping
There was a time when photographs served a different purpose, one that was essentially social. Cameras were used to capture memories and to record special occasions. Families were lined up, instructed to say “cheese”, admonished if they squinted – at 17p a print, you couldn’t afford to waste a frame. Someone would inevitably ruin it by blinking or looking away at the wrong time, but the photo often went up on the mantelpiece anyway. The best ones were the most spontaneous, the ones in which someone was captured erupting with gummy laughter.

Selfies, by contrast, are fundamentally self-aware and solitary. We are most often alone when we take them, alone when we edit them, and alone when we post them. When I come across a selfie on Facebook, Twitter or Instagram, they always seem to pulse with a quiet desperation. “Look at me,” they plead, “here I am, watching you watching me.”

The ‘like’ button
Even the selfies calculated to inspire envy – cocktail in hand, on a beach or a skyscraper – strike me as sad, a naked plea for admiration or approval. Really, that Facebook “like” button was a work of subtle genius, wasn’t it? We have never been more publicly assured of our popularity or more connected – and at the same time, we have never been more
self-conscious, or more alone.

How did we get to this point?

Social media’s promise, in the beginning, was that it would allow us all to stay in touch. Never mind that humans are only capable of maintaining relationships with a limited number of people – 150, according to the British anthropologist Robin Dunbar – Facebook seemed to promise that we could fool even our own psyches, extending our reach into the hundreds, or even thousands, of friends and followers. But of course, it was all too good to be true. The more time we spent online, the more isolated we became.

Recently, I went out for a pizza with my family. At the next table, another family seemed to have had the same idea. Except that, while our table was as noisy as you’d expect with two adults and two small children trying to catch up after a busy week, theirs was completely silent, except for the occasional sound of chewing and the click-click of fingers tapping on phone and tablet screens. Even the baby had her own iPad and headphones. At the end of the meal, they all squeezed up together and posed for a selfie – the perfect nuclear family for the age of ego.

If, like me, you’re wondering where this madness will end, be warned: the latest trends in the selfie phenomenon are, according to the internet, the “yogi” (the yoga selfie) and the “belfie” (a selfie of your bottom – thank you, Kim Kardashian. ) Oh, and Instagram recently added a function to allow users to upload short videos. The age of the “movfie” may be about to begin.

Rory O’Connell: ‘I didn’t get to know my sister Darina until I came to Ballymaloe’
8

I am the luckiest unlucky person I know
10