Rosita Boland: My encounter with a toy house echoed what I’d lost during lockdown 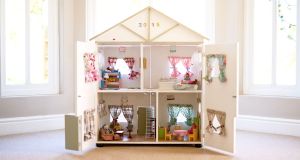 What’s the point of a doll’s house without dolls living in it? Photograph: iStock/Getty

A couple of weeks ago I stayed with friends I had not seen since December. I was their first overnight guest since lockdown. Amid the initial kerfuffle of socially distanced greetings and unloading of vittles and luggage and the general joy at seeing each other again, I saw something that had not been there the last time I visited.

The something was a doll’s house, set up in a corner of one dim room. I flew to it as if magnetised. This was not some modest construction. It was the most magnificent such toy I had ever seen in private ownership. It was a large Georgian-style house, in perfect condition. There were three storeys, and a proper staircase, complete with a tiny wooden banister. The walls were papered, the floors were carpeted, there were miniature working lights, and the interior doors all opened, each one with a teeny-tiny shiny brass knob.

It’s hard to explain how much I loved that clumsily built doll’s house and those mismatched dolls. I spent hours and hours and hours moving the dolls around the rooms, inventing stories for my odd little family of five

An aperitif awaited me in the kitchen, but I hadn’t made it in there yet, because I was transfixed. My very favourite toy as a child had been the doll’s house I inherited from a cousin.

“The furniture is in a box somewhere,” my friend said, clearly astonished at my interest. Her uncle had made this beautiful house, and decorated it. “I’ll have to dig it out sometime.”

I was longing to see the furniture, which I guessed would be gorgeous. But I was even more curious about the house’s erstwhile occupants. “What dolls did you have?” I asked my friend, delightedly examining the tiny framed pictures on the walls, and the neat white curtains on rails.

She stared at me blankly. “Dolls?”

“The occupants. The dolls that lived in your doll’s house. What were they like?”

“The people? No, there were no people.”

It was my turn to stare at her. “There were no dolls in your doll’s house? But what’s the point of a doll’s house without dolls living in it?”

In fairness, it was a surreal conversation for two women of a certain age to be having.

The doll’s house I inherited was a blocky, heavy, handmade structure. The facade opened awkwardly out in the middle. There were two chimneys on the roof, which kept falling off, and four square rooms inside, with a hall in the middle downstairs. It was roughly made, unlike the finely crafted, three-storey construction that belonged to my friend.

When I got the house as a child, it was unfurnished. But I had little dolls to live in it. Five of them. The fanciest one, Lottie, I had bought with saved pocket money on a trip to Dublin. Lottie came with a tiny handbag, which I made her carry everywhere. There was red-haired Jane in a blue dress, which I got from a schoolfriend by trading a year’s collection of comics. Mitzi was not really a doll. She was rigid from the neck down with a head that came off, and a lot of dark hair, and had originally been a decoration on top of a pencil. Then there were the identical twins, tiny plastic babies worth just pennies that had come in a lucky bag, which I called John and Jenny.

All through lockdown my house was empty. I was its sole occupant for months and months. In normal times my house always has people coming and going. I love having guests

It’s hard to explain how much I loved that clumsily built doll’s house and those mismatched dolls. I spent hours and hours and hours through childhood sitting in front of the house, moving the dolls around the rooms, inventing stories for my odd little family of five. One birthday, I awoke to find a box of furniture at the end of my bed – tiny tables and chairs, a goldfish in a bowl, a piano with a lid that opened, a fridge, and a dressing table with a mirror and many other things – and I just about expired with pure happiness.

This week I had my own first overnight guests since lockdown; three of them. All through lockdown my house was empty. I was its sole occupant for months and months. In normal times my house always has people coming and going. I love having guests. They seem to like being guests. Some of them have even stayed for months.

All the time during lockdown, while my house was empty, there were no stories being told. There was no activity. There was just me, moving alone through the rooms that so often were buzzing with chatter and laughter and all matter of slightly mad things happening. Without company, without visitors, without other people to make it truly alive, my house was in its own way as redundant as I considered my friend’s doll-less doll’s house to have been. My house is a beautiful place, but what I love most about it is how it ignites when people come into it.

This week my house came properly alive again for the first time in months. There were people staying in each bedroom. There were shoes in the hall that were not mine. There was a child laughing upstairs. There were stories being told around the kitchen table until very late. And it was wonderful.

Eileen Flynn: ‘As a Traveller woman, I was undermined in the maternity hospital’
Real news has value SUBSCRIBE