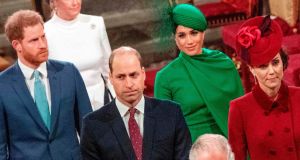 Harry and Meghan: the royal couple were said to be barely speaking to William and Kate by the time of the Commonwealth Day service in March. Photograph: Phil Harris/Pool/AFP via Getty

The royal rift that led to the duke and duchess of Sussex leaving Britain and stepping back from royal duties began after Prince William feared his brother had been “blindsided” by lust in his haste to marry Meghan Markle, a new book claims.

Harry was offended by William’s advice to “take as much time as you need to get to know this girl”, causing tension between the two that finally led to “Megxit”, according to the authors of Finding Freedom.

He was allegedly angered by the words “this girl”, perceiving it as “snobbish” and “condescending”.

One senior royal is said to have referred to Meghan as ‘Harry’s showgirl’, while another allegedly said: ‘She comes with a lot of baggage’

The Sussexes have distanced themselves from the book, by the royal correspondents Omid Scobie and Carolyn Durand, with a spokesman for the Sussexes saying they were not interviewed and did not contribute to Finding Freedom, which was “based on the authors’ own experiences as members of the royal press corps and their own independent reporting”.

In it, the authors claim to chronicle the deteriorating relationships between the Sussexes, senior royals and the palace “old guard”. One senior royal is said to have referred to Meghan as “Harry’s showgirl”, while another allegedly said: “She comes with a lot of baggage.”

In extracts serialised in the Times and Sunday Times, the authors claim there was no actual feud between Kate and Meghan, contrary to press reports, but that the two women had nothing in common. Kate would contact Meghan but “didn’t lose sleep” over it when she did not respond, while Meghan was disappointed by Kate’s lack of support, according to the book.

Rather, the authors claim, the alleged rift between the two couples was due to a growing coolness between Harry and William. By March, at the time of the Commonwealth Day service at Westminster Abbey, the couples were said to be barely speaking. Scobie told the Times Meghan had tried to make eye contact with Kate at the service but had been barely acknowledged. “To purposefully snub your sister-in-law… I don’t think it left a great taste in the couple’s mouths.”

Harry and Meghan’s decision to cut free grew out of Harry’s belief they were unprotected by the institutions around the monarchy and derided by the old guard for being too sensitive and outspoken, the book claims.

This apparently led to their decision to move from London to Windsor. “He wanted to get away from the goldfish bowl that was Kensington Palace,” the authors said. It is also claimed they believed other royal households were leaking stories about them to the press.

When they made their Megxit announcement, aides including the queen’s private secretary were said to be furious, and the queen and Prince Philip devastated

Once they decamped to Frogmore Cottage, on the grounds of Windsor Castle, thus splitting from the Cambridges at Kensington Palace, it was apparently “a big disappointment” to them to be told they must operate under Buckingham Palace’s umbrella. The authors wrote: “As their popularity had grown, so did Harry and Meghan’s difficulty in understanding why so few inside the palace were looking out for their interests. They were a major draw for the royal family.”

Having spent Christmas in Canada away from palace pressure, and formulated plans to move there, they were unable to immediately see Queen Elizabeth to discuss their plans. Believing they were being blocked from seeing the monarch, they even considered breaking protocol by springing a surprise visit by driving straight to see her from the airport terminal after landing back in the UK, it was claimed.

When they made their “Megxit” announcement on a new website, sussexroyal.com, aides including the queen’s private secretary were said to be furious, and the queen and Prince Philip apparently devastated.

Neither Buckingham Palace nor Kensington Palace has commented. – Guardian