How to Be a Man: We are not always noted for our style, but Irish men’s devil-may-care approach can have a certain appeal 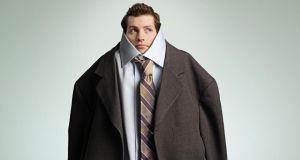 In a recent study, men in bespoke, made-to-measure suits rated more positively than men in regular off-the-peg suits in all but one key trait: trustworthiness. Photograph: CJ Burton via Getty

Sitting on a bar stool in John Fallon’s on a snowy January evening a few years ago, a man caught the attention of my single female friend. He was wearing a cardigan that was, she recalls, the same colour as the inside of a custard cream.

I did a quick – and probably not very discreet – swivel on my stool, took one look at the cardigan, his purple velour top and brown corduroys, and said “No”. (I may have even made that slicing motion across my neck as if to say, “Over my dead body.”)

But when he walked past us, I decided to stop him.

“€6 for this little piece of magic,” the man replied.

Hey, wait a minute. This guy might have been dressed like a young, thrifty Arthur Daley, but he knew a bargain when he saw one and he wasn’t afraid to take risks. He knew who he was: quirky, funny and self-confident.

A couple of years later, we were back in Fallon’s recreating the moment my friend and Mr Cardigan met. It was their wedding day.

The lesson? Never judge an Irish man by his cardigan, ill-fitting work suit, boot cut jeans, double-collared T-shirt, crumpled shirt or runners. Nor should you judge him – and I’m speaking only for myself here – by his green suede shoes.

Anoraks and Aran jumpers
Irish men have come a long way, given that we’re not exactly known for our distinctive style the world over. How many men do you know who actually wear Aran jumpers? Not many, I’m guessing. And how many own an anorak? Probably quite a few.

We are probably more comfortable in a recession, when we have less money to worry about getting all dickied up like a dog’s dinner. (A friend in New York calls my look “rumpled street urchin”. It’s true. I have lost many a battle with a bargain bin.)

A typical French man, on the other hand, is instantly recognisable by his navy-blue turtleneck sweater. You could pick an Italian man out of a crowd by his beautifully cut linen suit and white (or even pink) jeans. An American guy can wear chinos and a crisply ironed blue shirt with a baseball cap and still look like a million dollars.

Our lack of noted menswear style was reinforced by an email I received last week from the men’s department at Harvey Nichols in Dundrum (I used the wifi there once). It was a promotion for US menswear designers. The subject line: “America’s got style.”

After living five years in New York, I couldn’t realistically argue with that. Many Irish women have tried and failed to get their menfolk to live up to these international standards.

“My husband’s trousers weigh almost a stone when he has his landscaping kit attached to his belt,” says Dubliner Sarah Kronzer (43), who met her husband Dave in Seattle, where they both live. “He bought the cheapest glasses at the chemist. They were purple with little flowers on them.”

Women should resist trying to treat their boyfriend or husband as a fixer- upper. Aren’t custard cream cardigans part of the charm? More importantly, there may be a reason Irish women choose devil-may-care blokes, and only try to do a makeover on them afterwards.

A recent study by the University of Hertfordshire found that a photo of a man wearing a bespoke, made-to-measure suit was rated more positively than a man in a similar regular, off-the-peg suit on four out of five attributes: confidence, success, salary and flexibility. All the things a status- conscious partner might want reflected in their man.

Crucially, the bespoke bloke didn’t rate better on one key trait: trustworthiness. And that’s the most important one in my book. Perhaps the off-the-peg fella doesn’t try so hard to impress people, and that’s attractive to potential partners. At the beginning, at least.

Successful makeovers
Still, some Irish women have succeeded in making over their partners, especially when they don’t care about how they look.

Dominique Doran (45) often encourages – okay, forces – her boyfriend to buy something that he hates and vows to never wear.

“A few months later these items become his favourite clothes,” she says. “But he never learns from this and the painful process is repeated ad infinitum.”

Doran, who grew up in Dublin and now lives in Sydney, doesn’t hold out hope that her boyfriend will send his baggy jeans back to the 1980s where they belong. “That is going to require an act of God.”

The good news: more Irish men have embraced their inner hipster in recent years (check out the beautiful crazy at this year’s Electric Picnic) and have mostly learned not to wear socks and sandals, unless it’s done in a postmodern, ironic, “parish priest chic” kind of way.

Take the rest of us as you find us – we’re doing the best we can. Sarah Kronzer learned that the hard way.

“My husband doesn’t care one bit what anyone thinks of him,” she says. “And now I realise the world would be a better place if everyone felt the same.”