Hilary Fannin: Dubliners’ emotional DNA is embroidered on to the red velvet booths 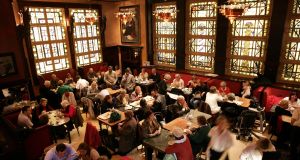 Bewley’s cafe on Grafton Street: Maybe if we could have paid for our coffee in affection rather than cash, the business would have survived. Photograph: Dara Mac Dónaill

I walked down Grafton Street recently, looking at some of the boarded-up businesses, and recalled with no small amount of sadness that Bewley’s cafe has been given no reprieve and is to close permanently, with the loss of more than 100 jobs. Apparently unable, among other financial outlays, to manage the €1.5 million annual rental cost of the protected structure, Bewley’s will not reopen the cafe, which has been part of the city since 1927.

What a lousy outcome.

So many people have lost so much during the pandemic: restaurateurs, booksellers, hairdressers, pub landlords, caterers, creche owners – the list goes on and on. And this unprecedented event that we’ve all been adjusting to has clearly been taking place on anything but a level playing field.

For friends and colleagues in the arts, Covid-19 has been like a collision with a driverless truck, their planned projects and predicted work instantly wiped out

For some people I know, the past few months have been a vaguely irritating disruption, involving the temporary closure of yoga studios and some inconvenient queueing for their elderflower tonic water.

For others, including many friends and colleagues in the arts, Covid-19 has been like a collision with a driverless truck, their planned projects and predicted work instantly wiped out and income drying up completely.

Of course, as the list of business casualties indicates, some will argue that there are far bigger problems to tackle than the fate of artists in this lot-done-more-to-do-don’t-think-about-the-winter state we’re currently negotiating. But while health, obviously and undeniably, is everyone’s priority, wellbeing doesn’t stop at the neck, does it? In my humble, unscientific understanding, there can be no cauterisation, no cut-off, no border, between our bodies and our minds.

Art matters, I would have thought, and just as much for the mental health of the audiences and society experiencing it as for those making the work.

It presumably mattered to the audiences who used to go to Bewley’s Cafe Theatre during their lunch breaks for soup and a sandwich and to watch a play. But unless that lunchtime venue, and the artists it supports, can somehow find a new setting, it will join the long list of Covid’s cultural casualties. It would seem so short-sighted, such an injury to the artistic mix of the city, were it to have to go.

But it’s not just the loss of the theatre, obviously. Along with the pubs that surrounded them, the cafes on Grafton Street and Westmoreland Street, which once sheltered shoppers and writers, bosomy matrons and rasher-thin poets, were as near as this town was ever going to get to its own Left Bank.

Breaking up over coffee slices and making up over cherry buns, our tortuous love affairs were born or buried in those reassuringly generous surroundings

Measuring out our lives in coffee spoons, as TS Eliot so eloquently described it, we sat, my friends and I, for great stretches of the 1980s at the cafes’ marble-topped tables, writing and talking and imagining futures. Breaking up over coffee slices and making up over cherry buns, our tortuous love affairs were born or buried in those reassuringly generous surroundings.

Our emotional DNA was embroidered on to the backs of the red velvet booths there, as we hung on to our cold coffee cups in the hope of something life-altering occurring. It’s no wonder the cafes struggled to stay afloat, with all those anxious souls lingering so long in their seats. Maybe if we could have paid for our coffee in affection rather than cash, the business would have survived.

If you distilled all the joy and sorrow contained within those cafe walls for all the years of their existence, the buildings might simply float away on a lake of mascara-stained tears and carmine kisses.

I remember sitting in Bewley’s with my grandmother Maddie in the 1960s, watching her pick vaguely at an iced fancy, and loving her tremendously, and fearing that she would be eaten by her fox-fur stole. I remember occasions there in the 1970s with my preoccupied mother, waiting for the rain to abate so that we could run to the bus stop. I remember imitating in my child’s mind the impatient way she smoked a cigarette, and wishing her lipstick stains on the heavy white cup were mine.

I remember in the 1980s fainting in the Westmoreland Street ladies’ room and being carried off in an ambulance. They never figured out what was wrong with me, and I was soon discharged from hospital. When I look back I realise it was simply sadness, the debilitating, undeniable knowledge that first love was gone.

And where better could you go with that realisation – so tiny in the scheme of things, so profound to your bruised heart – than an oriental cafe on a dusky Dublin street?