‘When Dricmas falls on a weekend, people are entitled to the Monday off’ 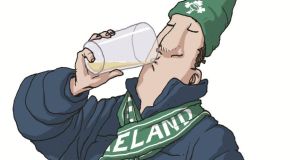 'Brian O’Driscoll did things for this country. I don’t think it’s too much to ask people to set aside one day of the year to reflect on that.'

Lauren wants a word. And while I have no issue taking orders from a woman boss – absolutely none whatsoever – I make sure to wait a good five minutes before sticking my head around the door of her office and asking her what she wants.

She’s there, “Why are you sending around memos telling people that the office will be closed on Monday?”

“Yeah, no,” I go, stepping into the room, “it was just a reminder that it’s Dricmas on Sunday. And when Dricmas falls on a weekend, people are entitled to the Monday off.”

I look around me, suddenly suspecting that I’m on one of those hidden camera shows.

She goes, “And why should people be entitled to a day off for Brian O’Driscoll’s birthday?”

“Is that a serious question?”

“Do I sound serious to you?”

Rogmas is obviously Ronan O’Gara’s birthday. The seventh of Morch – the day he entered this world

“You actually do. That’s why I’m wondering is this some kind of set-up? Is Naked Camera back on the TV or something?”

“I’ve been told you threatened one member of staff with the sack last year when you found out she did some work from home.”

“She has no interest in rugby.”

“Who interviewed her for the job then? That’s what I want to know.”

“This has been going on for years, has it? No work on the 21st of January.”

“Brian O’Driscoll did things for this country. I don’t think it’s too much to ask people to set aside one day of the year to reflect on that.”

“What do you mean by reflect on it?”

“Hey, people mork the day in different ways. I watch my Grand Slam and Heineken Cup final DVDs. I know Oisinn and JP usually drive from supermorket to supermorket, moving all the tomatoes from the vegetable section to the fruit section. I’ve gone with them once or twice. It’s a lot of fun – trust me.”

She looks down at her desk and goes, “What’s Rogmas?”

I’m like, “Rogmas? Have you got my work diary there or something?”

“All work diaries are the property of Hook, Lyon and Sinker. I asked you a question, Ross. What’s Rogmas?”

“Rogmas is obviously Ronan O’Gara’s birthday. The seventh of Morch – the day he entered this world.”

“So he’s another rugby player?”

“I can’t believe you’re asking me that. Your husband won a Leinster Schools Senior Cup medal. I’m thinking of phoning him, by the way. I don’t think you’re well.”

She storts turning pages in my diary then. She’s like, “The 20th of October.”

“It’s Pocmas, according to this.”

“Yeah, no, that’s Paul O’Connell’s birthday. One of my all-time heroes.”

“Another day the office is closed.”

“I might as well warn you, there’s Sexmas as well. The 11th of July. And if you tell me you’ve never heard of Johnny Sexton, I’m calling an ambulance for you.”

“You have all of those marked down as Bank Holidays.”

“Then you have all these other dates marked down as Holy Days of Obligation.”

“The ninth of January.”

“The Big Man. Leo Cullen. I was thinking of upgrading that one to an actual Bank Holiday.”

“The seventh of October.”

“The legend that is Cian Healy. ”

“And these are compulsory days off as well, are they?”

“No, they’re what I call Days of Religious Observance. People can have one or two pints at lunchtime if they want and I always turn a blind eye if they don’t come back to work in the afternoon. I’m usually too shit-faced to notice anyway.”

She slams my diary shut. “Well, not anymore,” she goes.

“Things are changing around here. I’m in charge now, Ross, and this is all coming to an end.”

“I do mean it. This is a business I’m running. In case you haven’t noticed, we’re in the middle of another property boom. I’m not paying people to take off Bank Holidays that you invented.”

“I didn’t invent them, Lauren. They’re days on which very important people happened to be born.”

“Well, in future, if people want them off, they can take them at their own expense.”

I actually laugh. “Lauren,” I go, “if you tell those people out there that they have to work on Brian O’Driscoll’s birthday, or on Johnny Sexton’s birthday, or Ronan O’Gara’s birthday, you are going to have a full-scale mutiny on your hands.”

“What are you doing?”

“Come on, let’s make the announcement to the staff – see how it goes down when they find out that you’re the Grinch Who Stole Dricmas.”

I walk out and I stand in the middle of the open plan office. Lauren is standing behind me. “Little announcement,” I go.

“Lauren here, as the new Managing Director of Hook, Lyon and Sinker, has decided to cancel all your Rugby Bank Holidays – I think it’s a word – forthwith? Not only Dricmas, but Rogmas, Pocmas and Sexmas as well.”

Graham – one of the best estate agents we have – goes, “Thank God for that!” and this sets off a round of nodding and smiles of relief amongst all the other staff.

He goes, “Most of us are on commission, Ross. If we don’t work, we don’t get paid. I’m not even that interested in rugby.”

“That’s not what it said on your CV.”

“Well, it’s a fact. All those days off. Then all those afternoons – I mean, it’s someone’s birthday at least once a fortnight – when you come back from The Bridge, stinking of drink and asking us what we’re all still doing in the office?”

I can’t believe what I’m hearing.

I’m like, “Okay, it’s three o’clock on a Friday afternoon. It’s the day before Dricmas Eve. Who’s coming to the pub with me?”

Literally no one moves.

“Fine,” I go. “I’ll celebrate it myself – even if it is at my own expense. As my daughter likes to say, I’ll see you next Tuesday.”

How to trace your Irish family history: a step-by-step guide
6

Surviving ovarian cancer: ‘When I was 23, I started to heed the symptoms’
8