‘Whatever you think about two men kicking the humanity out of each other in a cage. . . at least it’s not soccer’ 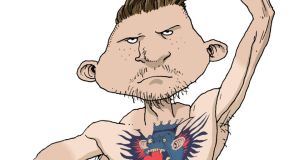 I never thought I’d see my teenage son back in nappies. I say it to him as well and he looks at me like I’ve just questioned his manhood. “It’s not a nappy,” he goes, “you bleaten floot. It’s a peerda Tudo shorts.”

Trust me, though, it’s a nappy – a big nappy, with a cup at the front, stuffed with Kevlar, to protect his testicles and no doubt future unborn generations of O’Carroll-Kelly cage fighters.

I’m there, “Of all the sports you could have picked, Ro, why did it have to be this?”

He goes, “You said the sayum thing to me when I was playing for Man Unirit.”

Yeah, no, he possibly has a point. Whatever you think about the idea of two men kicking the humanity out of each other in a cage, roared on by 300 or 400 salivating locals, at least it’s not soccer.

We’re in the cor pork of The Broken Orms in Finglas and it’s literally heaving. There must be – like I said – 300 or 400 people here and the place has the atmosphere of a cockfight. Actually, there was a cockfight on the undercord. Godzilla beat The Coop Killer in a pretty one-sided contest – in as much as I’m a judge of these things.

Ronan is definitely the hometown favourite, judging from the things that are being shouted in his general direction. “Boorst him, the doort boord!” and, “Rip he’s bleaten throat out!” and variations on that theme.

If I could send one message to the Jesuits right now, it would be, “Send rugby. Quickly. Because these people need something in their lives.” This is pretty much what Kildare would look like today if there’d never been Clongowes.

I’m there, “I’d, em, better let you go and warm up, or whatever it is you do before one of these things.”

Ronan’s expression suddenly changes. He’s staring over my left shoulder in what would have to be described as a hateful way? He goes, “There he is!”

He’s there, “The sham Ine fighting. The sham who’s about to get the bleaten lug pucked off him by the Man of the Moment here.”

I turn around and I end up getting one of the biggest frights of my literally life. Ronan’s opponent is a man – as in, like, a grown man? We’re talking late 20s, six-foot-two, maybe six-foot-three and built like Yoann Maestri.

I’m there, “You’re not fighting him?”

“Two hits,” Ronan goes. “Me hitting him, then him hitting the flo-er.”

I’m like, “Ro, look at the size of him. What is he, Romanian or something?”

“Ro,” I go, putting my orm around him, “I can’t let you do this. There’s always someone weaker than you to pick on. That’s the best advice I can give you as a father.”

He shakes my orm off him. “Rosser, Ine fighting Radoslav and Ine warden you – doatunt embaddass me.”

Which is what I end up having to do, because Ronan storts making his way towards the cage, then the announcer is suddenly on the mic, going, “Laaadieees and gentlemeeen . . . ”

There are no ladies here – let me just say that for the record.

A humongous roar goes up. I find my way to my seat. Ronan’s put me sitting next to his old dear in the front row. She doesn’t even acknowledge me as I sit down. “If I’d had full custody,” I go, “we’d be at Castle Avenue right now. Or Templeville Road. Or even – dare I say it – Stradbrook? Instead, it’s all this.”

She doesn’t even answer me. She storts shouting, “Battorum, Ronan! Battorum!” through the bors of the cage, then everyone else gets in on the act as the announcer says his name. They’re all going, “Ro-hnin! Ro-hnin! Ro-hnin!”

There’s no doubt the crowd is on his side. But my hort is beating like a Kango Hammer when I see the famous Radoslav stripped to the waist. He’s got abs like speed bumps and biceps like basically beach balls?

I’m there, “I’ve got a bad feeling about this.”

The bell rings and they make a rush for each other. Ronan throws a punch, which misses his opponent by a couple of postcodes. And in that moment, Radoslav – standing on one leg – spins however-many-degrees-are-in-a-full circle and delivers the most unbelievable kick to the side of Ronan’s head.

There’s, like, a loud crack. Ronan’s legs buckle and he collapses on the floor like an empty glove puppet. The noise from the crowd suddenly dies. The Broken Orms hasn’t known silence like it since the day I asked the landlord if he knew how to make a lychee bellini.

Radoslav is suddenly bearing down on Ronan, getting ready to finish him off. I’m up off the seat like it’s on fire and my orse is catching. I grab onto the bors of the cage and I stort literally shaking them, going, “Leave him alone! He’s had enough! He’s my son and I love him!”

And that’s when, from out of this little fallen bundle in the corner of the cage, a leg suddenly appears and kicks Radoslav full on the knee. I hear the most unbelievable snapping sound. Radoslav’s orms drop and he falls to one side, his right leg sticking out at possibly the most horrific angle I’ve ever seen – and I’ve been in some messy rucks.

Ronan’s up off the deck immediately, then he’s suddenly on top of the dude – as he’d say himself, pucking the lug off him, until the referee decides that he’s seen enough and he drags him off him, then he lifts Ronan’s hand to declare him the winner.

The crowd goes totally ballistic – it’s pretty obvious they’ve found a new Mixed Mortial Orts hero – but all Ronan can do in his moment of glory is give me what would have to be described as a withering look? Then he mouths a single word at me – and that word, I’m sad to say, is, “Spanner!”