‘We’ve learned our lesson from the Celtic Tiger. Next time it turns to shit, the next boom is only seven years away’ 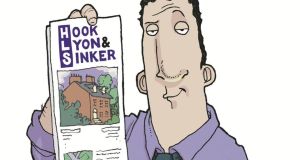 JP’s old man says it’s a big day. And it is a big day? We’re in his Beamer Five Serious and we’re heading for Kinnegad. A development of 17 gaffs built at the height of the boom and vacant ever since is finally going on sale this morning – and we, the very nice people at Hook, Lyon and Sinker, are the selling agents. Oh, and it was my idea to rename the development Casper Court, in recognition of its former ghost estate status. You’d have to say fair focks.

“Four years ago,” JP’s old man goes, “they were considering knocking them all down. Now we’re selling them with a starting price of €320,000. What a country.”

I’m there, “I definitely think we’ve learned our lesson from the whole Celtic Tiger thing. Next time it all turns to shit, we’ll know that the next boom is only seven or eight years away.”

He goes, “They should send you to Greece to talk to the rioters.”

JP, who’s sitting in the back of the cor, tries to get in on the act then. He goes, “The Country House with the City Sensibility. I came up with that.”

No one says anything. I feel a little bit bad for the dude. His old man is still talking about making me an actual portner and his nose is obviously out of joint. As the only son in the family, he would have been expected to take over the business one day, except his old man I convinced that I’m the man to lead Hook, Lyon and Sinker into the next period of unsustainable economic growth.

And I can’t resist going, “Yeah, no, but I’d expect better from the man who came up with, ‘Arklow – A Piece Heaven, Off the N11!’ That was back in your heyday, of course.”

And then I stop. The atmosphere in the cor suddenly changes. Because if I’ve copped it, you can be sure as hell that the other two have copped it as well.

The 70 or 80 people standing at the entrance to Casper Court aren’t customers at all. They’re basically protesters? I notice the banners with “Spirit of 1878” and “Hook, Lyon and STINKER!” on them. Then I spot Dáibhéid Straide, with his big bald head and his humungous moustache, then beside him, my old dear, who’s chanting, “Human need – not human greed!” which is hilarious given that the clobber she’s wearing probably cost the same as a deposit on one of the gaffs she’s trying to stop us flogging.

JP’s old man goes, “The New Land League? What the hell are they doing here?” and he’s saying it to me, because I was the one who drew them on us, by selling all those repoed gaffs in Killiney and Dalkey.

He gets out of the cor – mad as hot chip fat – and he morches straight over to them.

JP goes, “Look, people are driving away,” and there’s definite joy in his voice. “They don’t want to pass the picket.”

He’s right, though. People are pulling up, seeing the protest and heading off. I turn around in the seat, convinced that he’s somehow screwed me over here. I’m there, “Did you tip them off that this was happening today?”

He laughs. He’s like, “It was advertised! Look, Ross, you were the one who picked a fight with this crowd. And this is it – so go fight!”

I get out of the cor and I morch over to them. JP’s old man is already ripping into this Straide dude. Their noses are, like, three inches aport. He’s going, “You’ll pay for this! We’ll see are you still smirking outside the Four Courts!”

Except Straide isn’t intimidated at all. He’s there, “It’s a peaceful protest aimed at highlighting the predatory practices of estate agencies such as yours.”

“Predatory practices?” JP’s old man goes. “All we’re trying to do is breathe new life into …” and then he looks over his shoulder at me. “Where the hell are we?”

“To breathe new life into Kinnegad,” he goes. “To give hope to people who’ve only ever known … well, who knows what these people have known.”

Straide goes, “I promised your colleague there,” nodding in my general postcode, “that if he took us on, then he should be prepared for a fight to the death. And he laughed in my face.”

JP’s old man looks at me again, obviously expecting me to weigh in here. So I look at the old dear and I go, “Human need? That’s rich coming from you. You’re 70 per cent tyre rubber and animal organs. You know you’re destroying my career here?”

She goes, “Exploiting the misfortune of other people for your own monetary gain is not a career, Ross.”

You’d have to wonder what kind of future this country has if that idea ever catches on.

I’m there, “You’re not even making sense. I think all that silicone has finally storted to leak into your brain.”

And that’s the moment when JP’s old man turns and storts walking back to the cor. I chase after him, going, “Jesus, the hum of gin off her breath. The woman’s a walking fire hazard.”

He opens the cor door, then totally out of the blue, he goes, “I’m going to have to let you go.”

I can see JP smiling in the back.

His old man goes, “No one sells houses like you. But this is bad for business. First, the distressed property auction – now, this.”

He goes, “Okay, I’m giving you a month. Then you’re out the door.” ILLUSTRATION: ALAN CLARKE