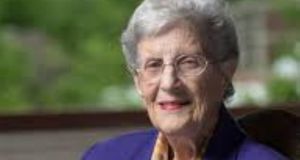 Jean E Sammet: her most enduring legacy is the role she played in the creation and longevity of the computer programming language Cobol.

Jean E Sammet, an early software engineer and a designer of Cobol, a programming language that brought computing into the business mainstream, died on May 20th in Maryland in the United States. She was 89.

She lived in a retirement community in Silver Spring and died at a nearby hospital after a brief illness, said Elizabeth Conlisk, a spokeswoman for Mount Holyoke College in Massachusetts, where Sammet had earned her undergraduate degree and later endowed a professorship in computer science.

The programming language Sammet helped bring to life is now more than a half-century old, but billions of lines of Cobol code still run on the mainframe computers that underpin the work of corporations and government agencies around the world.

Sammet was a graduate student in mathematics when she first encountered a computer in 1949 at the University of Illinois at Urbana-Champaign. She wasn’t impressed.

“I thought of a computer as some obscene piece of hardware that I wanted nothing to do with,” Sammet recalled in an interview in 2000.

Her initial aversion was not unusual among the math purists of the time, long before computer science emerged as an academic discipline. Later, Sammet tried programming calculations onto cardboard punched cards, which were then fed into a computer.

“To my utter astonishment,” she said, “I loved it.”

In the early 1950s, the computer industry was in its infancy, with no settled culture or rigid career paths. Lois Haibt, a contemporary of Sammet’s at IBM, where Sammet worked for nearly three decades, observed, “They took anyone who seemed to have an aptitude for problem-solving skills – bridge players, chess players, even women.”

Sammet became one of the most prominent women of her generation in computing. Her deepest interest was in programming languages and using them to open computing to a wider audience. Her ambition, Ben Shneiderman, a computer scientist at the University of Maryland, recalled her saying, was “to put every person in communication with the computer”.

Jean E Sammet was born on March 23rd, 1928, in New York. Both her parents, Harry and Ruth Sammet, were lawyers. Jean excelled in maths, starting in the first grade, and chose to attend college at Mount Holyoke because it had an excellent mathematics department.

In 1974, Sammet became the first female president of the Association for Computing Machinery, a leading professional association in computer science. She held the post for two years.

Yet her most enduring legacy is the role she played in the creation and longevity of Cobol. By the end of the 1950s, it was becoming clear that computers could be powerful tools not only for scientific calculations but also in business – helping to manage accounting, payroll, purchasing and manufacturing operations. That led to the creation of the Common Business Oriented Language, or Cobol – a means to handle not just numbers, but business data.

Grace Hopper, a computer pioneer at Sperry Rand in the late 1950s, led the effort to bring computer makers together to collaborate on the new programming language. Hopper is often called the “mother of Cobol,” but she was not one of the six people, including Sammet, who designed the language – a fact Sammet rarely failed to point out. (Sammet worked for Sylvania Electric at the time.)

“I yield to no one in my admiration for Grace,” she said. “But she was not the mother, creator or developer of Cobol.”

Sammet and the other five programmers did much of the new language’s design during two weeks of nearly round-the-clock work, holed up in the Sherry-Netherland Hotel in Manhattan. Their proposal was presented in November 1959 and accepted with few changes by the computer makers they worked for and the Pentagon.

As it evolved, Sammet pushed to inject more engineering discipline into the language to make it more useful and reliable in industries such as banking, health care and retailing, and for government agencies.

Yotam Ottolenghi: how to turn yesterday’s bread into a feast
10