As heard on The Women’s Podcast: A new play explores the power of this swashbuckling role model for girls and young women 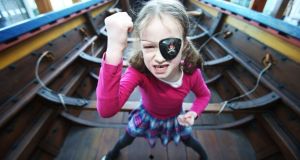 Five hundred years ago a little girl was told she couldn’t go to sea. A sailor is not a suitable aspiration for a young woman. That’s what her mother told her. A girl on an ocean ship? It’s just not done. That was her father’s response. She was ten years old.

Today, in various parts of the world little girls are told that education is not for them, that sexual pleasure is not something they should expect in later life, and that who they marry is not for them to decide. Marriage is a family decision, female genital mutilation a cultural requirement, and the refusal to educate girls the result of warped ideologies.

Of course, these are not the problems of liberal suburbia. Our little girls are growing up wearing gender neutral clothes, they no longer exist solely in bastions of princess pink, they play with primary coloured Lego, they are at ease with Playstations and Xboxes, they read rewritten versions of Cinderella and Snow White where the heroines wear Nike trainers and choose not to kiss the prince at the end, and they can parrot the message that they can do anything and be whatever they want to be just as children in the 50s could rattle off the Our Father and a dozen Hail Marys.

The little girl from five hundred years ago was Granuaile, Ireland’s infamous pirate queen. She was a real little girl with real wants and desires for all that the words “pirate queen” now belong exclusively to the realm of fiction. We think of words like swashbuckling, imagine ourselves be-parroted and be-patched, and our senses are flooded with images from popular culture.

So many Pirates of the Caribbean movies. In choosing to tell her story, Granuaile The Pirate Queen, a storytelling show for seven to ten year olds in Axis Ballymun, we gain an opportunity to explore the wants and desires of real little girls today. The show welcomes the audience into an inclusive space. The children sit on the stage with the storyteller, on rough benches that one might find on a sixteenth century galley, under shining lanterns that dim and flare, surrounded by the sound of the salty sea.

Gabrielle, the storyteller, has brought her brother, Karl, to work. He is a businessman, an investment banker, he wants to see how this storytelling thing works. Lots of big businesses are bringing jugglers and things into the workplace, it’s supposed to make people happy, and then they work harder. Karl is amazed when Gabrielle speaks directly to the children, asking them questions, listening to their answers. He thinks it would be easier if they went to a library and read a story in a book. On their own. Quietly. speak directly to the children. The show pivots on a central point of connection between Granuaile and the girls and boys who first listen to and then take part in the telling of her story. Gráinne Ní Mháille wanted to go to sea. What do you dream of? What do you want to do? What do you want to be? What do their answers tell us? An actress, a singer, a footballer, a wrestler, the popular answers. Our children are dreamers. That’s a great thing, says Gabrielle, for if we cannot dream of something how can we possibly make manifest the reality. A teacher, a doctor, an actuary – this last from a particularly earnest little boy. A model and the child in question poses using a tabloid vocabulary of finger points and pouts. Our children are susceptible to influence. From the adults and the world around them.

I like school. I like my teacher. I’d like to be a teacher. I want to be famous because then I’ll be rich and being rich equals happiness. The relentless message of popular culture. Gabrielle gently counters this all too easy assumption. Nobody’s life is without rough waters. We have made much progress in our country. Last year’s Referendum on Marriage Equality made me feel hopeful for our society for the first time in a very long time. We no longer live in a country where women, upon marrying, must leave the work force. We no longer live in a country where the church exerts absolute control over our sexuality and fertility. If we want to continue making progress then we need to listen carefully to what our children are saying, we need to question and probe unhelpful messages, and we need to provide them with the tools and the confidence to trust their own voice. Could you ask for a better role model of confident self-expression in defiance of society than a medieval pirate queen?

Granuaile Pirate Queen is written by Veronica Coburn and Gabrielle Breathnach and is at Axis Ballymun from 5 – 16 March. www.axisballymun.ie

‘When you do put your clothes back on, you’re changed’: The nudists of Killiney
5