The Yes Woman: The dentist is the root canal of all fears

For those with a phobia of the dentist, a root canal is as bad as it gets 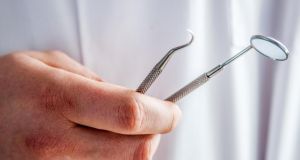 Panic, Seneca says, arises when we go beyond the bounds of truth and into uncertainty. Photograph: Thinkstock

In the Roman church of Santa Maria Della Vittoria, there’s a sculpture that has captivated me for years. The church is unspectacular from the outside. Churches are as common in Rome as pubs are in Dublin, but this church is different. Inside, it is an obscene tidal wave of gold and marble, as though the interior was designed by Marie Antoinette on crystal meth.

The sculpture of St Teresa is extraordinary. She reclines, wrapped in liquid folds of robe chiselled by Bernini from unrelenting white marble, supposedly in communion with God. Bernini chose to portray this union with God in the form of an orgasm – for that, clearly, is what is etched in Teresa’s facial expression.

I saved money from my bookshop job for months, and went to see the sculpture for my 21st birthday. So I found myself standing below the plinth, having been asked for money by a churlish monk, staring up at St Teresa and the mischievous marble cherub pointing an arrow rather lewdly at her crotch.

I stood there, my mouth agape, staring for what could have been five minutes, or an hour. Suddenly, I felt a strange crumbly collection of objects on my tongue. It was one of my teeth.

When I got back to Ireland, I took a trip to the dentist and got the process of root canal started. A combination of student poverty and fear stopped me from finishing it, and I went about with a two-week temporary filling for several years.

A few weeks ago, the tooth started sending occasional warning shots of hot agony directly up into my skull, and I figured that the time had come. My distaste for going to the dentist was suddenly outweighed by the pain in my face. I went to MyDental in Ballsbridge, where they have a frightening-looking, high-tech microscope that actually speeds up the process and makes procedures such as root canal more efficient. The dentist was kind, but the fear of pain was cresting. That combined with the prospect of someone fiddling about near my nerves with metal tools was bringing me close to panic.

As the chair reclined and my gaze was forced towards the ceiling, I got thinking about St Teresa and the broken tooth. Her expression of raw emotion, and Bernini’s subversive challenge to Catholicism in creating her, had created an intense feeling in me, and no doubt anyone lucky enough to have seen her.

That feeling had renewed something in me just as much as my current paralysing anxiety was abrading me. I could sense my resolve, my steadfastness and even my wish to fix my sore tooth bleeding away as I lay rigid in the dentist’s chair.

As the looming eyes of the strange microscope came blinking down at me, my thoughts wandered to Seneca. He and the other Stoic philosophers espoused the overcoming of what they considered destructive emotions.

Panic, of the kind I feel now in the dentist’s chair, is one of the worst. It builds slowly in the time leading up to whatever it is we’re dreading, and is – at least according to Seneca – something that arises when we go beyond the bounds of truth and into uncertainty.

I’m torn from my reverie by an odd sensation as the dentist starts to push a metal post up through my now hollow tooth, and into the soft tissue of my swollen gum.

Seneca wonders “what does it avail to run out and meet your suffering?” by inflating possible negative outcomes before they happen. As the post is pushed further into my gum, I consider that, for people who fear the dentist, this is about as bad as it gets.

And it isn’t that bad. I’m safe, and the dentist is kind and attentive. Pain is not in itself a terrible thing; it’s usually brief, and we are generally better for having experienced it, if it has a purpose. We might have an altered perspective, or better appreciate the good things we have.

We might even, after years of evading something, come to recognise that we have inflated our fear far beyond reason. There’s more fixed than a broken tooth.

Jim Gavin: the Dublin footballer manager and pilot on living the high life
10