The Time of my Life: ‘I landed in Dublin with a suitcase full of tools and my knife’

Jessica Murphy, chef, on her journey from New Zealand to Galway 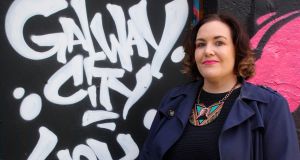 Jessica Murphy: “It took me nine years living in Galway to get Kai. It was 2010, no one had money.”

What I didn’t realise about New Zealand for my whole life is that it’s two islands in the middle of nowhere. As far as I was concerned, growing up in New Zealand, it was the centre of the universe. In Australia, I met Dave, my husband. Then I was working in the UK and hadn’t been home to New Zealand for four years. I was pining for home. I got home and then I was like ‘oh my god, I’m home, New Zealand is in the middle of nowhere!’ I was worried about where my career was going to go . A tin of anchovies was $17 and I was getting $10 an hour.

David was born in Ireland. I didn’t want to go to London, where you had to be ‘harder’ than I was in kitchens. I landed in St Stephen’s Green with a suitcase full of Dave’s tools – he’s a welder and a fabricator by trade – and my knife. I think we walked around St Stephen’s Green about eight times with a crap map. I just wanted to fulfil the dream of working in a Michelin-starred restaurant. I got two job interviews, one at Guilbaud’s and one at Thornton’s. I worked at Thornton’s for about a year. You can only do that kind of work for so long, it’s kind of unsustainable.

One day I was watching telly and a Fáilte Ireland ad was on, with pictures of an empty white beach saying “Move to the west”. That was 2005, and I was like, “where’s that? Why can’t we live there. That looks nice.” We jumped in the Fiat Punto and drove down to Galway for a few days. I gave my CV to Ard Bia and Aoibheann McNamara rang me saying “Darling, you should come work here!” I loved her straight away because she’s a legend. My love affair with Galway just started there.

I left school at 15 and I washed dishes for 2½ years. I saved every cent and put myself through college and worked in a bar at night. The thing is, nothing has ever been planned. Where I got the lease for Kai was a flower shop. I had been home in New Zealand crying about why I couldn’t get my own restaurant. It took me nine years living in Galway to get Kai. It was 2010, no one had money. I was walking over the bridge praying to my granny – not that I believe in religion – but I said ‘if you’re up there, I swear, you have to do this for me!’ I’ve got a touch of dyslexia and told my bank manager I couldn’t write a business plan. So I sat with him for maybe three days while he helped me write up my business plan. All this weird stuff came together, and then I was in like Flynn.

Jessica Murphy is the co-owner and head chef at Kai Cafe & Restaurant, Galway.