The Queen and us: joining in with our neighbour's birthday party

There are a number of current European queens but, for most people here, there’s only one Queen to rule them all 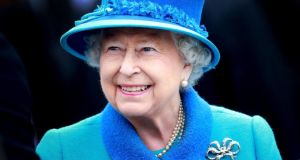 There are several royal queens around the world, but it’s Elizabeth II who truly owns the definitive article here and at home as in: “The Queen”. No other queen has ruled as long, been as influential or as stalwart. Queen Margrethe? Queen Silvia? Queen Sonja? They are all current European queens, but there’s really only one Queen to rule them all.

Today the Queen became the longest reigning British monarch ever, at 63 years, seven months and two days. She has thus now reigned longer than her great, great, grandmother, Queen Victoria. We don’t have much truck with royalty here, but there can be few Irish people who don’t wish her well in reaching this historic landmark.

During her long-anticipated visit to Ireland in 2011, she gained widespread public respect.

She had a bit of fun here too, what with laughing with the Cork butcher in the English Market who put a pair of sunglasses on a pig’s head, presumably just for the hell of it. And let’s not forget Pat O’Connell the fishmonger, who cracked a joke with her about a monkfish, describing it as “the mother-in-law fish”. That proved even more of a hit than the porcine wearing sunnies. She found either the joke or the fishmonger so memorable that O’Connell was invited some three years later to a reception at Buckingham Palace.

So what has the Queen ever done for us? Well, for a start, her ancestor and namesake, Elizabeth I, was responsible for the charter in 1592 which established Trinity College Dublin. Trinity’s full legal title is in fact the “College of the Holy and Undivided Trinity of Queen Elizabeth near Dublin”, a fact which probably even current and past students are unaware of. It would also be news to graduates of the last century or more that they were attending an academic institution “near Dublin”. Trinity was one of the locations visited by The Queen in 2011.

It was a visit decades in the making. In 1996, the then President Mary Robinson, had tea with The Queen at Buckingham Palace. She was the first Irish head of State to have an official visit. Her successor, President Mary McAleese, continued building the relationship, and accompanied the Queen during her subsequent visit.

In the State dinner in her honour at Dublin Castle, in tribute to her host country, the Queen wore a white silk dress embellished with no less than 2,091 hand-sewn embroidered shamrocks. The opening line of her much-reported speech was delivered in Irish: ‘’A hUachtarain agus a chairde”.

She also spoke of the “sad and regrettable reality that through history our islands have experienced more than their fair share of heartache, turbulence and loss. These events have touched us all, many of us personally, and are a painful legacy. We can never forget those who have died or been injured, and their families.”

The Queen was indeed personally touched by horrible events in Irish history. She lost her cousin, Lord Louis Mountbatten, in 1979 in the IRA bomb that also took the lives of three others when it exploded on their fishing boat at Mullaghmore in Co Sligo. Her visit to Ireland four years ago helped create the circumstances for her son, Prince Charles, whose godfather Mountbatten was, to finally visit the location when his relative was assassinated. He came to Sligo this summer, in another landmark event for both our islands.

The Queen is now 89, and she is still working. Today, she was out and about in Scotland, conducting yet another ceremony. She opened the new Scottish Borders Railway. She acknowledged the record of her royal reign, but said modestly that the milestone was not one to which she had ever aspired. It’s certainly a milestone that her son Prince Charles, now 66, will not achieve.

The Queen in numbers Number of years on the throne, as the longest reigning British monarch ever: 63

Age when she ascended the throne: 25

Prime ministers in office, with whom she has had weekly meetings at Buckingham Palace: 12

Countries she has visited in an official capacity: 116, including Ireland in 2011

Number of roads named after her: 237

Number of years she has been driving, although she has never had a licence: 70. Neither is she required to display licence plates.

Estimated worth: £340 million. Although she famously never carries any money on her.

Number of corgis she has owned: At least 30. Her first corgi was named Susan.

Glasses of champagne a day she allegedly likes to have: one. Although she might go mad this evening, and have two.