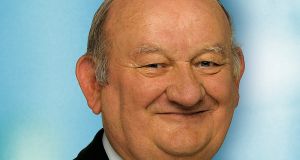 Paddy (PJ) Sheehan, a former Fine Gael TD for Cork South West, was a formidable political figure whose 50-year political career straddled a time of great change from the 1960s and the last remnants of the revolutionary generation to a world of more professional if less colourful politicians.

As President Michael D Higgins observed in tribute, Sheehan was “quite unique as a parliamentarian, completely resistant to any of the anodyne suggestions of any press office. He spoke with humour, wit, sincerity and indeed on occasion with some genius on the problems and prospects of west Cork.

Sheehan was popular across the political divide, as evidenced by the tributes paid to him not just by colleagues in Fine Gael but also by figures in Fianna Fáil and Labour. He was mischievous and well capable of a witty soundbite, and a hard-working TD for 25 years.

His father, Ger Johnny Sheehan, and his mother, May (nee McCarthy), raised three children on their small 30-acre holding at Kilbrown in Goleen at the very tip of the Mizen peninsula in west Cork.

“I was born on St Patrick’s Day in 1933, the year of the economic war,” Paddy remarked when he retired from the Dáil in 2011. “My father always said the best two-year-old bullock on his mountain farm wouldn’t pay the christening money for me. That’s how bad the cattle prices were the year I was born.”

But his father was an innovator, setting up a business exporting mackerel to Philadelphia, and the son inherited the same entrepreneurial spirit, taking over the family store in Goleen and expanding the business to deliver fertiliser and coal before branching into auctioneering.

If he got his work ethic from his father, he got his politics from mother, who came from Bantry and whose family were staunch Michael Collins supporters. May’s teenage brother, Benny McCarthy, was killed by the anti-treaty IRA on St Patrick’s Day 1923.

Sheehan was elected to Cork County Council in 1967 and quickly made his mark, his trademark wit setting him apart, as evidenced by a debate at County Hall on fish quotas when he declared it was “a proven fact that since these quotas came in, there are herring dying in the Irish Sea from old age.”

He ran for Fine Gael in the 1969, 1973 and 1977 general elections without success before he finally made it to the Dáil in 1981, taking a seat previously held by Labour, and together with his running mate, the more urbane Jim O’Keeffe, ensured Fine Gael held sway in west Cork for more than 20 years.

Sheehan proved himself an eloquent champion for rural Ireland and particularly, small farmers and fishermen, famously remarking in one Dáil debate that if rural decline was allowed to continue, there would be nothing left in West Cork except for “bachelors, bullocks and briars”.

As Simon Coveney noted in his oration “the small suckler farmer, the ferry operator, the inshore fisherman, the grocer, the GAA official, the stonemason, the RNLI crew, the local pensioner, the tourist operator, the small hotelier – they all had a voice through Paddy for almost half a century.”

Sheehan could also be shrewd, such as when he announced money for a new pier for Schull ahead of the budget – something that led to stormy exchanges with minister for finance Alan Dukes, who had made no such commitment but was forced to deliver on Sheehan’s pledge.

To get elected from somewhere as sparsely populated as the Mizen peninsula for seven successive general elections was a testament to Sheehan’s hard work, and he enjoyed reminding folk of the challenge he faced in his own inimitable style: “If only seagulls had votes, I’d top the poll every time.”

He used to proudly proclaim that in his first 20 years in Dáil Eireann, he got 19 piers built or extended in west Cork – irrespective of who was in government – and he enjoyed some great jousts across the Dáil floor with Fianna Fáil leader Charlie Haughey, which helped his cause.

When Haughey resigned as taoiseach in 1992, Sheehan asked him as his “last act in office” to extend the powers of the Castletownbere harbour master “over the waters of the Berehaven Sound”, prompting Haughey to say: “The battle is over, Deputy. Let us return our swords to their scabbards.”

Sheehan was devoted to his late wife, Frances, whom he met at a dance on Holy Thursday 1957, and whom he married a year later. She used to drive him the nearly 400km trip from Goleen to Dublin every week the Dáil was sitting between 1981 and 2002.

Sheehan lost his seat in 2002 but made a spectacular comeback five years later, recapturing the seat in 2007 at the age of 74, brushing off criticism that he was too old for politics with a quip. “Sure, I’m younger than the pope, and that’s good enough for me.”

Patrick Joseph Sheehan was predeceased by his wife, Frances, by just a week, and is survived by his son, Dermot, and daughters Deirdre, Eucharia and Maebh, as well as grandchildren Caragh May, Gearoid, Ciaran and Ellen.