If you missed the miso revolution, it’s time to get pasted

This savoury, umami-rich paste can transform many dishes, including roast chicken 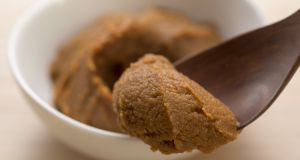 Miso is a traditional Japanese seasoning, often made with soya beans.

The  miso revolution of the past five or so years is remarkable. What was once just a paste to make miso soup has now turned into a global flavour enhancer. From Copenhagen to Mexico city, chefs now make their owns misos and use them in all sorts of interesting ways.

Much of this experimentation began in the Nordic Food Lab at the beginning of the last decade, when chefs started to make misos from barley or chickpeas instead of the traditional soya beans. Miso is made from growing a particular mould on rice and then combining it with a cooked paste of soya beans. After growing it on the barley, western chefs substituted the soya beans for everything from pumpkin seeds to sourdough.

The revolution continues and Irish chefs have embraced the trend. Cúán Greene, who worked at Noma in Copenhagen, recently made a wonderful brown bread miso. Of course I’m not advocating that you make your own from the outset as you can purchase really good ones in food stores around the country. Though making your own is more than possible – the specific spores to grow the mould can be bought online.

You can buy a starter kit at go.luvifermente.eu. The chefs behind this company spoke at the Food on the Edge symposium in Galway a number of years ago and they’re passionate about making misos.

How to make roast chicken with barley miso

I recently picked up a beautiful Japanese barley miso from Evergreen in Galway. As I said, miso is great for making soups, but it’s equally good as a gorgeous marinade. To make the marinade, mix a few spoons of miso with some rapeseed oil. If you want you can add a little mirin (Japanese sweet rice wine) to the mix but the miso is quite complex in terms of flavour.

Smear a whole chicken lightly with the marinade and leave for four to six hours in the fridge. Roast at 180 degrees for about an hour or until a core temperature of 72 degrees is reached. Be careful not to use too much of the miso as it’s quite powerful. Also, excess marinade may burn.