Survival school: There’s more than one way to gut a bunny

Ever wondered how you’d survive in the wild (okay, okay, in the grounds of Carton House hotel)? It takes stamina and a strong stomach to be Bear Grylls

Conor Pope takes part in the Bear Grylls Survival course to see if he can survive the wild, while making fires and navigating over treacherous terrain. Video: Daniel O'Connor 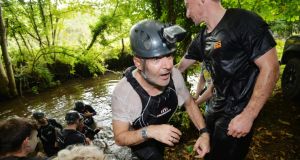 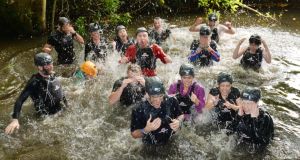 Conor Pope does a river dance with other participants in the Bear Grylls Survival Academy at Carton House, Maynooth. Photograph: Alan Betson 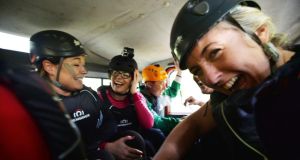 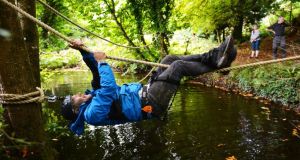 Conor Pope hangs on in there at the Bear Grylls Survival Academy at Carton House, Maynooth. Photograph: Alan Betson

I start to worry when a bearded man, Josh Valentine, walks through the trees towards me carrying two dead rabbits. He slaps the once cute but now bloody bunnies down hard on a tree trunk in the centre of the clearing and, in a low, manly voice, growls the words I’ve been dreading.

“This is lunch. You’re going to have to gut and skin these before we eat.”

He eyeballs our little group, then produces a cleaver and – mercifully – hands it to one of my fellow survivalists, who sets about decapitating and disembowelling the animals with gusto as I heave at his shoulder. He pulls out a still-warm heart, and then a liver, followed by a pair of kidneys. The offal is passed to Valentine, who puts it to one side for our later, um, enjoyment. The rabbit quickly loses its hide, as I come close to losing my breakfast.

When the rabbits are done, I’m put centre stage to gut a trout. I make a mess of it. There’s blood all the way up to my elbows and on my clothes, and I reek of fish innards. I do my best to wash my hands using a canteen of mossy water, but fail miserably and set off to make a tepee out of twigs instead.

Welcome to the visceral world of Bear Grylls. The great survivor is not actually here, although he did make a brief appearance on a pre-course video we watched in plush Carton House hotel before heading into the wilderness. Instead of the messiah of make-and-do, we have a couple of his apostles, including Valentine, and a team from Xtreme.ie who have joined forces with the Bear Grylls people to offer his brand of survival academies on the grounds of the Maynooth hotel.

We break into teams to face our first challenge. Starting at a designated point, we have to find a piece of “treasure” hidden in a field using our newly acquired directional skills. My team is told to walk exactly 100m to the west, then 50m south and then 15m east. If we do it right, we’ll find a treat.

As I’m the only person in our group wearing a watch with hands on it, I take charge. I quickly and confidently march my team straight into a patch of neck-high nettles, where we wander around aimlessly for a bit, getting stung with every step. There’s no sign of a treat. Then I realise I’ve led my team east instead of west.

Mortified, I casually suggest we go back from whence we came, doing my best to create the impression that the diversion was planned. My stung teammates don’t buy it. There is a good deal of scowling and rubbing of sore limbs as we go west. Eventually we find our treat. It is a pouch with three condoms and a handful of tampons. Weird, right?

An hour later our group is gathered around small pieces of kindling and carefully dissecting the tampons so they can be used as tinder for the fire. At the first mention of tinder, some of the younger folk in our group titter. I’m too earnest for tittering right now and, using my special Bear Grylls knife, I start to light a big fire. Sparks fly and my tampon bursts into flames – not a sentence I ever thought I’d type, to be honest – but then the flame dies and my kindling stays unlit. So I try again. And again. I blow hard. And I get more tinder. But it is hopeless. And so am I.

Powderly looks at my sorry pile of wood and burnt cotton wool and suggests we go for something to eat. This lifts my flagging spirits because I’m not really in the mood for recently killed rabbit, which is stewing nearby, and I reckon I have rendered the group’s trout inedible due to my poor gutting skills.

We walk over to a fallen tree and Powderly peels bits of bark off. Underneath the surface is a colony of mealworms. Before I can say “Oh my sweet Lord, what on earth are you doing?” Powderly is chewing on one. “They are a good source of protein in the wild,” he tells me. “And they taste like peanuts.” Only half of what he says is a lie.

I can’t back out now, so I pick up a worm, pop in into my mouth and close my eyes. Crunch. The sound is the worst part. Two chews and a swallow later and the poor mealworm is gone. It doesn’t taste remotely of peanuts. It doesn’t taste of anything really, but the thought of eating it is gross.

Not as gross as the next thing on the menu. Powderly squeals – or whatever the manly equivalent of squeals is – in delight because he’s found an enormous earthworm. He sets about squeezing the life out of it. Worm guts pour out, leaving the skin and a little bit of flesh behind. It looks like an emaciated sausage and smells of clay. I draw a line in the mud. I’m not eating worms. Powderly puts it into his mouth and chews it with what looks like relish – not the Ballymaloe kind, sadly.

Next up: knife skills. I make a pointy stick. “You’re doing it all wrong but it’s deadly all the same,” says Powderly. Valentine starts cooking the rabbit’s offal on the pointy stick.

We move on to shelter. We have a competition to see who can make the best one; the losers will have to eat the offal.

Forty minutes later I am looking proudly at my shelter. It looks awesome. Later again I am eating bloody rabbit innards off a stick. My shelter, made with a cobbled- together selection of rotting wood and ferns, sleeps six. It looks great, but it doesn’t pass the Powderly test.

Six of us pile into the ferny darkness. Then he dumps gallons of water over the top of the “shelter”. It spectacularly fails to live up to its name. We have no fire, a porous shelter and, other than an impressively pointy stick, no way to fend off bears or tigers or crazed cannibalistic survivors of a nuclear apocalypse. I sit on a log and mournfully spoon rabbit stew into myself and fret about what is coming next.

We have to run through rough terrain to a fast-flowing river and then cross it commando style, which means we lie on top of the rope, hook one foot around it and pull ourselves across. But as soon as I lie on the rope, I flip around and find myself hanging, bat-like, as a raging torrent – okay, okay, a gentle trickle – flows beneath me. I haul myself to the river bank, after which I am ordered across the river again, this time balancing on one rope while holding another as if my life depends on it.

I make it across. From there we run to some Land Rovers for a hair-raising spin around a muddy track before we get to another river. Fully clothed, we jump in and run in chest-high water through smoke bombs detonated by the course organisers. It would be great fun if it wasn’t so cold. Actually, it is great fun despite the cold. The whole day is like that: the survival academy is tough and occasionally stomach-turning, but still very enjoyable. When the apocalypse comes, I’ll be all set. As long as I don’t have to boil any bunnies.