Stephen Donnelly: I am a very proud feminist ... to me it's a no-brainer

How to be a Man: Patrick Freyne talks to the Independent TD about gender diversity, parenting, digging potatoes and feminism

Independent TD Stephen Donnelly talks to Patrick Freyne about what it is to be man . Video: Bryan O'Brien 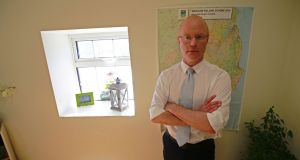 Stephen Donnelly at his constituency office in Greystones, Wicklow: I’m a proud feminist. Feminism to me is a no-brainer. Photograph Nick Bradshaw

How to be a Man is a series exploring masculinity and the challenges facing men in Ireland today.

When you were a kid what did manliness and masculinity look like?

I don’t know what it was like. I grew up in Dundrum. I went to a co-ed school. I had very strong women in my life. In my family, my grandmothers, my mum, my neighbours.

My mates were guys and girls. I went to a co-ed school in Wicklow. So that whole narrative of men versus women, it was never really part of my youth, to be honest.

Was there pressure to be macho when you were younger?

I did engineering, which is just men, an abhorrent imbalance of men and women. There were fantastic women in engineering but they were outnumbered a hundred to one. How we didn’t all get expelled is beyond me. We were not well behaved suffice to say. There were paper planes lit floating down over theatres landing in people’s hair and setting fire to them. Had there been a healthier mix of men and women, I doubt that would have been happening.

Finance and politics are very male dominated, what does that do to those sectors?

I think it produces some very poor decision making and it creates a particular environment. There’s now loads of research to show that in the financial world and in other worlds, men and women on average have different risk profiles.

There’s good research from McKinsey and from others on mixed teams in the corporate world and in the public service world that when you have decent gender representation at the board level, at senior management level, those organisations outperform either purely male or purely female organisations. The mixed team is better

So all of the institutions: the cabinet, the Dáil, the Department of Finance, the central banks, the banks and the developers, all failed. All of them took really stupid risks or weren’t paying attention to what was going on. An awful lot of ego was driving things, certainly in banking and in the construction industry and in the Dáil.

Would it have been different if we had healthy mixes – who knows? The research suggests that these big systemic risks which all of these institutions including the one I’m now in, allowed to happen might have been flagged more if we’d had a healthier mix.

What does feminism mean to you?

I am a feminist. I’m a very proud feminist. Feminism to me is kind of a no-brainer. Feminism for me is equality between men and women, boys and girls. There is a glass ceiling, no question. There are some women I know that I worked with in the past, brilliant women, who just don’t have the opportunities here that they have in London or Boston or New York.

It’s a work in progress but feminism to me is a matter of human rights. Men and women are equal. It needs to be enshrined in the law and needs to be seen in societal outcomes.

It’s not that men and women should be doing exactly the same things, but if a father looks to be the primary care giver and says ‘I’m going to take four or five years out of work’, that should be as easy or difficult for him to do as it is for a woman, and similarly for a woman who wishes to focus on a career. There should be no impediment.

How is your life different from your father’s?

I think men and women have been moving closer together for a very long time – maybe for a hundred years. Certainly in one generation, since my parents were twentysomethings, we’ve been moving from the stereotypes of the “homemaker” and the “breadwinner”.

So for women they’ve become far more empowered and the laws have been changed – repealing the Eighth [amendment] still needs to happen to give them control over their bodies – but we’re getting there. And men have kind of moved more into spending time with children and taking on responsibilities of the home.

But here’s the downside… We’ve all been tricked into working harder to borrow more and more money to buy houses. The houses aren’t bigger or better. They’re the same houses our parents were buying. So the entire project has gone off on a very bizarre journey where we’re all working harder and harder to pay more and more debt to people who have capital around the world. So there’s a meta question here that has to be addressed.

How are you with housework?

I love cooking. I used to work in a kitchen in Bondi Beach where I learned my knife skills. My family are great cooks. My father’s a great cook. My granny’s an amazing cook. I grew my own potatoes for the first time this year and I’m very proud of that. It’s awesome because you can bring the kids up and pick them and cook them. Housework, I love it just as much as everyone else in the world. I hate it, but I do loads of it.

Were you ever in a fight?

Yeah, I’ve been in a few fights. I grew up with a big mop of red hair… It’s gone now but it was big. When you’re a young kid growing up in Ireland with a big red afro you end up in a few fights. I nearly got killed in Australia at least once [and] to be honest, martial arts actually turned out to be really, really important. I didn’t start any of them by the way, but sometimes you have to defend yourself.

When did you last feel unmanly?

Never, obviously. I refute the premise of the question. I don’t know, what does it mean to be unmanly? I don’t know.

Do you ever envy younger men?

I envy younger people because they just have more time than we do and they don’t have to get up at half five in the morning with children. But I don’t know, I have a suspicion, founded on nothing really, that social media might be pushing the genders apart again.

When I talk to parents with teenage kids they say the kids interact with the world with their phones in very different ways. The young fellas are like ‘Ha ha look! A clown farted’ and they say the young women are taking photos of themselves.

The last time I cried was reading an article by a good friend of mine who is married to another good friend of mine who has MND [motor neuron disease], Ruth, and it was her piece in The Irish Times. I came home late from Leinster House one night at about 11 o’clock and my wife said just read that and she had it on the table and it was raw. It was just the most incredible piece of writing and it was very upsetting because she was being so honest about her life and her amazing husband who has MND and is the most extraordinary man and human being. It was raw and that was quite upsetting. Just to see someone you care very much for, to see that sort of exposed. I cried.

Did you ever see your father cry?

Is that a major difference between the generations?

Is it? I don’t know. I was reading a book called Who Cooked Adam Smith’s Dinner [by Katrine Marçal]. It’s a feminist treatise on economics. The basic treatise is that feminism is an economic battle about control of income and rights. And in the prologue there’s a brilliant quote… It’s something like: Feminism has been the process of swapping power and influence for intangible things like the ability to cry in public.

Hilary Fannin: I console myself with a new pair of knickers
3

‘We poured our hearts and souls into it’: Last orders as landmark pubs and restaurants sell up
5 Siblings: Francis & John Brennan
6

Aortic dissection: Getting to the heart of the matter
Real news has value SUBSCRIBE