Spare chronicler of his own Cape Breton 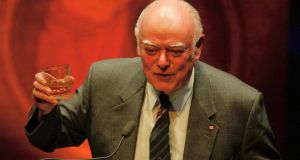 Alistair Mac Leod, a Canadian writer whose only novel – composed over 13 years and extracted from him only after a campaign by his publisher involving surveillance, subterfuge and outright bribery – brought him literary fame, a lucrative prize and a bottle of very fine Scotch, died Sunday in Windsor, Ontario. He was 77. The cause was complications of a stroke.

The appearance of Mac Leod’s novel No Great Mischief , published in 1999 to rapturous reviews, augmented the quiet, impeccably burnished reputation he had long had among other writers. In 2002 the Glasgow Herald Scotland described him as “one of the greatest living writers in English”; his work has been translated into many languages. In 2001, No Great Mischief won the International Impac Dublin Literary Award. The prize of €100,000 is widely described as the world’s largest for a single work of fiction.

The sweep of Mac Leod’s reputation today is all the more noteworthy when considered alongside his slender output, the one novel and fewer than two dozen short stories. If, as he liked to say, he seemed constitutionally equipped to turn out a novel once every 60 years or so, he had his reasons. To begin with, he had a day job: at his death, he was an emeritus professor of English at the University of Windsor.

Mac Leod avoided computers, setting his work down in longhand with a watchmaker’s deliberation. “When I put my stubby ballpoint pen on the paper,” he told the Santa Fe New Mexican , “I take a lot of time thinking about what I’m writing. And so I say to myself, ‘Well, now this has to happen,’ and I make little notes to myself, like ‘Don’t forget to make the parents older than the children.’”


Boyhood
Like nearly all Mac Leod’s fiction “ No Great Mischief ” is set on Cape Breton Island in Nova Scotia, where he spent his boyhood and maintained a home . A multigenerational story that intertwines the fates of the island’s fishermen and miners with those of their Scottish forebears, the novel explores what for its author was an abiding concern: the tensions that pervade a community caught between the pull of tradition and the pressure of assimilation.

Narrated by Alexander Mac Donald, who has forsaken his island roots for a life of bourgeois discontent as an orthodontist, the novel is set against a background of Gaelic speech, old Scottish songs and the ever-present swing of the sea. But as Mac Leod’s spare, elegiac prose makes plain, life on Cape Breton is no pastoral idyll.

A coal miner’s son, John Alexander Joseph Mac Leod was born in North Battleford, Saskatchewan, in July 1936, a descendant of ancestors who came to Cape Breton from the Hebrides in the late 18th century. His parents, Gaelic-speaking Cape Breton natives, had moved to Saskatchewan to seek work during the Depression, but when Alistair was 10, they returned with him to the island.

He began writing short fiction in the 1960s, and with complete fealty to his internal chronometer completed no more than one story a year. His first, The Boat, about a death at sea, was collected in the 1969 edition of The Best American Short Stories , alongside work by Bernard Malamud, Joyce Carol Oates and Isaac Bashevis Singer. His debut short story collection, The Lost Salt Gift of Blood , appeared in 1976 to glowing notices, as did his second collection, As Birds Bring Forth the Sun , in 1986.

Then a watching-and-waiting game began. His Canadian publisher, McClelland & Stewart, had gotten wind of the fact that he was starting a novel. That, as the company’s publisher emeritus, Douglas Gibson, recounted in an interview was cause for great excitement – and great apprehension. “At first my role was just to be an encouraging friend,” said Gibson, “But then, in 1988, I became the publisher of McClelland & Stewart, and at that point my benevolent interest turned into greedy self-interest. And my hitherto irregular phone calls turned into a routine of calls every six months or so to say, ‘How’s it coming?’ And he would be charmingly vague.”


Work in progress
Gibson shadowed his quarry. A network of moles across Canada, attending readings of Mac Leod’s work in progress, phoned Gibson to report on new passages he had read. Years went by. Gibson’s semi-annual calls became quarterly, monthly, then daily.

Mac Leod “likened them to being in a car with a small child who’s constantly asking: ‘Are we there yet? Are we there yet?’” Gibson says. One day Gibson, on a tip from Mac Leod’s wife, tracked Mac Leod to the Toronto railway station. On the platform Gibson slipped unobtrusively into the empty seat beside him. “Isn’t this amazing!..Here I am patrolling Union Station looking for best-seller authors and I find you.”

Mac Leod laughed but would not relinquish his briefcase when Gibson offered to carry it. It contained the only copy of the manuscript. Gibson gained possession of the manuscript only in 1999.

In hardcover, No Great Mischief spent a year and a half on Canadian best-seller lists.

Mac Leod, who had homes in Windsor and in Dunvegan, on Cape Breton, was named an Officer of the Order of Canada in 2008. Besides his son Alexander, Mac Leod’s survivors include his wife, the former Anita Mac Lellan; four other sons, Lewis, Kenneth, Daniel and Andrew; a daughter, Marion Mac Leod; and nine grandchildren.