‘Sexual consent legislation will protect both men and women’ 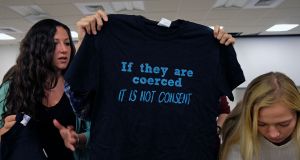 Proposed legislative changes, which will define sexual consent in law for the first time, will protect the human rights of both men and women, according to the CEO of the Dublin Rape Crisis Centre.

Speaking to the Irish Times Women’s Podcast, Noeline Blackwell said the changes will make it clear, “to the judiciary and to everyone: If you have sex with someone and they are asleep, you’re raping them.”

Tanaiste Frances Fitzgerald secured Cabinet approval for the legislation this week, which will be introduced as part of the Sexual Offences Bill in a fortnight’s time.

Noeline Blackwell told Kathy Sheridan, presenter of the Women’s Podcast, that the legislation is “not perfect but it’s a big advance and badly needed”.

She said the clarification of consent is not a panacea, but setting out specific situations where it cannot be given makes it clear when the law is being broken.

A Eurobarometer survey last year showed worrying attitudes to consent and sexual assault, said Blackwell. “21 per cent of people thought in some circumstances it was okay to have sex without consent, including where someone was drunk, or on drugs and incapable of giving consent,” she said.

This highlights the need for this legislation, which will set out, “the bare minimum and starts to set standards of what we mean by consent and what is not acceptable,” she said.

Also on the podcast, Blackwell welcomed a further commitment by the government to review of the use of ‘honest belief’ as a defence in rape cases, to be carried out by the Law Reform Commission after a request from the Minister for Children Katherine Zappone.

The ‘honest belief’ defence is when an accused can be acquitted of rape if they can persuade the court and a jury that they believed consent was given, even if the person was asleep, unconscious or unable to communicate.

Blackwell said this review is important because the defence does not give due regard to situations where a person is unable to voice their refusal of consent due to fear.

“It’s for that kind of a case that you need to make sure that the danger is contained, while recognising at the same time that in a case where somebody does consent – no matter how sorry they may be after it – if they consented at the time then it is a total defence to the person who is charged with rape, and it should be,” she said.

To hear Noeline Blackwell’s conversation about the consent legislation with Kathy Sheridan and journalist Tanya Sweeney in full, go to Soundcloud, iTunes, Stitcher and irishtimes.com.

We want to hear your thoughts.