Seán Moncrieff: The planet is cooking for all of us, no matter our politics

Why is climate change pompously owned by the left and dismissed by the right? 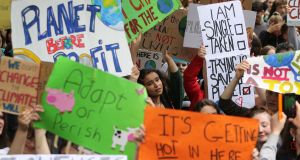 Climate change shouldn’t be an ‘issue’ at all, other than what to do about it. Photograph: Nick Bradshaw

Oddly, what’s wrong with our political system may have saved it from becoming worse. In many countries, politics has become increasingly tribal. You know the reasons: the amplifying effect of social media, the rise of right-wing populists and, in response to that, the growth of uber-judgmental woke culture.

The shrinking of the middle ground has made it far more difficult for politicians to do what they have always done: compromise. Compromise has come to be seen as a synonym for capitulation or betrayal. It is a sign of weakness or depravity. If the other side get something of what they want, then they have got everything they want. In US Congress, bipartisan legislative attempts, once common, have become increasingly rare. And this isn’t just a Trump effect. Congress was similarly divided during the Obama presidency, too.

Yet what some politicians find tough to do, we do all the time. With our partners and kids and in our jobs, we continually settle. We don’t expect to get everything we want. Life would be impossible otherwise, and unendurably unhappy. We accept that we might not be able to live the completely ethical life we want. But we are prepared to do that, even be proud to do that, for the trade-off of being able to pay our bills, care for the people we love and do as much good as we can.

Ethically, most of us live in the centre, but in the simplistic hot-take social media universe, it’s too tempting to pretend we are unyieldingly virtuous while others are not; or those others have the option to live ethically but choose not to.

This tribalising is also restrictive: it limits us to a basket of core beliefs. To be accepted by the left tribe, you have to be anti-Trump, anti-Brexit, pro-abortion, pro-gay and trans rights. To be on the right means to have the opposite opinions. There’s no room to choose from either basket, to interrogate each issue on its own merits.

Of course, there are some sets of ideas than can more naturally be grouped together. Liberals tend to be liberal on a range of issues. Yet one burning (pun-intended) problem where the left-right schism defeats all rationality is climate change. The planet is slowly cooking for all of us, no matter what our opinions are on the role of government or immigration. And because it’s based on decades of verifiable science, it shouldn’t be an “issue” at all, other than what to do about it. Yet it is pompously “owned” by the left and ignored or dismissed by the right for no reason that makes any sense, given the gravity of the situation.

Interestingly, a lot of this doesn’t apply to Ireland; at least not yet, and hopefully never. The bogus Fianna Fail-Fine Gael tribalism seems to be dissolving, while the natural human inclination to be in the centre is still reflected in our electoral politics, perhaps because of much-derided clientelism.

One of the advantages of the parish pump system is that it humanises. Through constituency clinics, pretty much any citizen of this country can have face-to-face contact with a member of the Dáil (a rarity in most other democracies) and as often as not that TD can help them. Yes, they often help constituents with problems that the national and local bureaucracies should be dealing with anyway. Yes, TDs should be about legislation, not social work. But one effect of this clientelism is that it erodes the possibility of demonisation. It’s (usually) trickier to make a blanket judgment about a person when you’ve met them; especially if they’ve helped you out.

It works the other way, too. The kind of politicians we have is in part a result of those clinics, of regular contact with constituents. They are reflecting what they see in us. Because politicians are people too.