Seán Moncrieff: Me and our new pup, we’re getting there

A puppy arrived in the Moncrieff home just before Christmas. She’s a narcissist 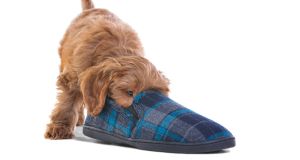 New pup: we’re learning to communicate despite her love of chewing slippers and just about everything else. Photograph: iStock

I’m usually the first to get up in our house: which, in the last few weeks means that I have the added responsibility of poop patrol.

As I’ve mentioned here before, Washington Swamp-standard lobbying had been taking place over the issue of getting a dog. I was heavily ambivalent, but thanks to a change of heart from another family which bumped us up a waiting list – giving me no time to think about it – a puppy arrived just before Christmas.

Like, I imagine, all puppies, she’s a narcissist. Enter the kitchen and she assumes that you’ve come to visit her, specifically to play, and seems baffled that you might be there to do anything else. She assumes everything in the kitchen is a chew toy, including electrical cables. The legs of the table have taken heavy damage. I did put cardboard around them, but the next morning the floor had a new carpet of cardboard particles. Slippers are viciously attacked, irrespective of whether there’s a foot in them or not. She seems to have a vendetta against any of Daughter Number Four’s toys, especially her favourite, Rabbit, who goes to bed with her every night. We’ve had a few near misses.

As with raising children, there are a lot of experts ready to tell you that you’re doing it wrong

After the last article, and when I tweeted about the arrival of the puppy, I got a lot of messages telling me how fairytale-ish it was going to be: the unconditional love, the cuteness. We’d be BFFs in no time.

It’s not quite like that so far. As with raising children, there are a lot of experts ready to tell you that you’re doing it wrong and should be riven with guilt. But it’s not always possible to bring her into the garden every half hour (weather permitting) and do a happy-dance when she pees. Daughter Number Four and most of her siblings (Daughter Number Two is frankly indifferent to pets) love the puppy but are also quite wary of her. Her play can involve too much claws and teeth. There have been tears more than once.

Then there’s the poop. On my morning patrol it’s quickly become apparent that the amount she produces somehow exceeds the amount of food she consumes. It’s a marvel of physiology; perhaps even physics. Unless she has a secret food supply. Or some sort of small-dog hang-up where she feels the need to poop as much as an Alsatian.

Yet what all this feels like is that Puppy is figuring out her place in the family. The rough play is exclusively aimed at the kids, who she seems to be regard as her siblings. And the mornings have got better. She hasn’t quite cracked holding it in all night, but at least now she poops in the same location. It’s in front of the oven. (If there is a doggy religion, she seems to regard the oven and dishwasher as part of her pantheon of Gods.) She’s also figured out that in the mornings I want some quiet time, so she doesn’t shoot out of her crate as soon as she sees me.

We’re learning to communicate. I’m also the last to go to bed, and she knows it: her night-time whining is aimed singularly at me, and it’s so I’ll put her on my lap in front of the TV, where she won’t try to attack a cushion or pee on a teddy bear. It’s just so she can snuggle in before she sleeps for the night. We’re getting there.