Séan Moncrieff: What do we mean when we talk about ‘Irishness’? 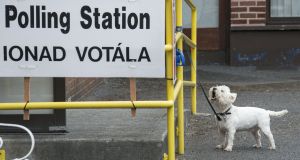 ‘I’m the guy who will lecture that – to paraphrase Monty Python – every vote is sacred.’ Photograph: Dave Meehan

I’ve given very little thought to the local elections. I’ve a lot on, plus there’s all the attention I’ve given to the Brexit thing. (It’s merely a Thing now. It has managed to use up all the nouns.) The mere thought of having another political thought has left me enervated, vaguely toying with the idea of ignoring it.

But if I did, I’d have to get all pompous on my own ass: because I’m the guy who will lecture that – to paraphrase Monty Python – every vote is sacred. A non-vote is in effect a vote for the very politicians you might complain about; or at least the ones you complain about the most. To do nothing is the worst possible option.

But my internal nag-monologue on the importance of exercising our democratic right hasn’t been working very well in the past few weeks. I was pretending to listen to myself while looking at pictures of cats on my phone.

Then the election flyers arrived. Most of it was the usual stuff, with candidates trying to appear personable in their photograph, and visionary in their pitch to voters. But there were some candidates and ideas I had not been aware of previously. For instance, a so-called pro-life candidate who declared on his leaflet that having a baby before the age of 30 protects against breast cancer; something which has been known “for 300 years” and is being kept quiet by the HSE.

Suddenly, I feel like voting. To quote the song, if you can’t be with the one you love, love the one you’re with. This isn’t love, but there is an eminent logic to voting for people you’re not too pushed about in order to keep the people you strongly disagree with from power.

A few weeks ago, the Sign of the Times survey by Behaviour & Attitudes, published in The Irish Times, reported some troubling findings, which we might see play out in these elections. The majority of people surveyed feel Ireland is changing too fast, that it is too “politically correct”. Almost half feel Irish identity is being eroded through immigration.The pace of social change in Ireland has been dizzying, and it’s understandable how some people, many people, might find it disconcerting. That doesn’t make them bigots. Having to choose a pronoun for yourself now is very new and confusing.

But the “sense of identity” finding is more difficult to explain, especially as a function of immigration. Precisely defining “Irishness” is a tricky thing to do. Most of us don’t speak Irish as a daily language, or listen to Irish music or spend our days leafing through Seamus Heaney books. Many teenagers who have lived their whole lives here speak like they’re from Orange County.

Irishness has a know-it-when-you-see-it quality, but if there’s any evidence this is being eroded, it’s largely from cultural and commercial sources: TV, film, the internet, sport, M&S and McDonald’s. At a glance, our city streets look like any other western country’s. But this change wasn’t transported here in the baggage of Nigerians or Poles. We’re not building mosques on every street corner. We’re building Starbucks.

So far, Ireland has largely avoided an outburst of the nasty, blame-foreigners narrative that has infected the politics of so many other parts of Europe. But that’s not for the want of trying, and no doubt before May 24th, parties and individuals will try to insinuate that we’ve lost something due to immigration; but without specifying what that something is.

Yet, if you ask tourists, or indeed immigrants, to choose words to describe what being Irish means, “friendly” will invariably pop up. Because we are. Historically, and today, the Irish are open-hearted towards the outsider, sensitive to what it’s like to be a stranger in a strange land – which is also, incidentally, a central Christian precept. To vote to protect Irish identity by keeping others out might actually serve to destroy it.