Ross O’Carroll-Kelly: ‘Oh, right – you’re one of these maskier-than-thou people’

‘Talking to strangers on the doorstep is dangerous. Who knows what I might catch?’ 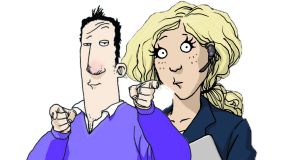 I hear the van coming up the driveway – the crunch of gravel under tyres – and I practically run for the door.

Yeah, no, I haven’t laid eyes on Janet since Sorcha reported her for not wearing a mask – or doing the whole two-metre distancing thing – when she’s delivering packages to the gaff. Although the real issue, between ourselves, was Sorcha’s jealousy at the friendship – very much banter-based – that had developed between us since the stort of the whole zombie apocalypse.

1 Trump endorsement by Jack Nicklaus leads to avalanche of dismay
2 Gardaí believe men in Cork murder-suicide chose to let woman survive
3 Supermarkets compared: How Dunnes, Lidl, Tesco and M&S measure up
4 Over 90m vote early as winning post looms for Trump and Biden
5 The Irish living life for less in sunnier climes
6 Cork shootings: Mourners at Mark O’Sullivan’s funeral told of devoted and caring son
7 Varadkar rejects allegations he acted unlawfully in sharing draft GP contract
8 France 35 Ireland 27: Ireland player ratings
9 Caitlin Moran: ‘In middle age you lose the amount of f**ks you give’
10 Fintan O’Toole: Defeat for Donald Trump will shape our world
11 Explainer: The GP contract talks at the centre of Varadkar controversy
12 Sean Connery the man has died. Sean Connery the indestructible legend lives on
13 Ireland fall short against France as England win Six Nations title
14 Covid-19: Johnson announces second lockdown for England
15 ‘This could be Belfast in 1968’: How political conflict in the US could descend into violence
16 The real Contagion virus is out there and it’s causing virologists to worry
17 The West has failed – US and Europe have made a mess of handling the crisis
18 US election: Trump using executive orders to reshape fabric of America
19 Richard Ford: America could fail. I have never felt this way before
20 Jennifer O'Connell: Ireland's pandemic compliance is extraordinary
21 Irish surfer Conor Maguire rides ‘Ireland’s biggest wave’
22 A ‘baffling’ adaptation of Sebastian Barry’s The Secret Scripture
23 Portugal reimposes lockdown in most of the country
24 Surprised Donegal shopper discovers stowaway tarantula
25 David McWilliams: A plan to put Ireland’s 200,000 vacant buildings to use
26 World Handicap System: What is it? How does it work? Will my handicap change?
27 Andy Farrell: Ireland weren’t clinical enough in France defeat
28 US pop culture has struggled to come to terms with Trumpism
29 James Bond actor Sean Connery dies aged 90
30 France 35 Ireland 27: France player ratings
31 Even if Biden becomes president, there’s no turning back
32 Covid crisis: 416 new infections bring October total to almost 25,000
33 Two hundred Irish retailers for all your online Christmas shopping
34 Cosy and colourful: this Wicklow cottage is a décor delight
35 Revenue publishes list of companies tapping State for wage support
36 Martina Navratilova: ‘If I had Twitter 30 years ago, I would have been raising holy hell’
37 UCD medical students withhold fees in protest at fee increases
38 Kanturk farm shootings: A timeline
39 Most face masks to protect against coronavirus do not meet standards
40 Jota forgets disallowed goal to steer Liverpool past West Ham
Real news has value SUBSCRIBE