Ross O’Carroll-Kelly: ‘Chorles wants to turn Lambay Island into a prison for people who don’t pay their water bills’

‘Sorcha reaches for the envelope in front of her. The colour runs out of my old man’s face. He’s from that generation of men who were once aroused by brown envelopes but now live in fear of them.’ 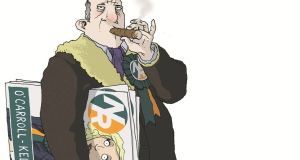 “I’ve always regarded business as being rather like the rugby scrum – there are unsavoury things that happen in there that we should all just turn a blind eye to in the knowledge that they are probably for the common good.”

The latest opinion poll suggests that my old man is now the most popular porty leader in the country, while New Republic are on course to win up to 20 seats in the general election.

“Of course,” the old man tells Seán O’Rourke, “we haven’t given up on the possibility of attaining an overall majority!”

I’m watching this through the window of the control room, my Dubes up on the console. Sorcha just sits there, grinning like a donkey chewing on glass, waiting for the chance to bring the ceiling down on the old man.

Seán O’Rourke goes, “Charles O’Carroll-Kelly, what do you say to the charge that you’re in this position because you’ve avoided saying anything of substance on any particular issue and that questions on specific topics tend to be met with waffle – amusing waffle, but waffle nonetheless.”

The old man isn’t thrown by this at all. He goes, “I think it was Plato or one of those terribly clever chaps from the olden days who said: ‘One of the penalties for not participating in politics is that you end up being governed by your inferiors.’ It’s a lesson I trust the electorate will heed come Friday.”

Sorcha goes, “You see, you’ve done it again, Chorles. You’re asked a question and you refuse to answer it. Just as you’ve refused repeatedly to state your position with regard to water chorges.”

There’s no way Seán O’Rourke is going to let Sorcha take over his show. “Well, on the subject of water charges,” he goes, “given that your stated position is that everyone should be paying them, can we take it, Sorcha O’Carroll-Kelly, that you’ve now paid yours?”

She goes, “Thank you, Seán, for giving me the opportunity to clear this matter up once and for all. Given the stresses of preparing for an election, which involves going out there and actually interfacing with the people of Dublin Bay South and listening to their problems and concerns, I was forced to leave a lot of our – let’s just call it – domestic paperwork to my husband. Unfortunately, in the case of this bill, he forgot to pay it. It was simply a bureaucratic oversight on his port.”

The old man chuckles to himself because he thinks she’s digging a hole for herself. What he doesn’t realize is that it’s for him.

“Chorles,” she goes, “I can see you’re very amused by this. And yet water is an issue on which New Republic has no position whatsoever.”

The old man goes, “On the contrary, Sorcha, our position is very clear. We consider the issue of this valuable natural resource far too important to our future and that of our children to seek to make political capital from it, as you have done throughout your campaign.”

She’s there, “Because, Chorles, I have something here that I think might make your position a little clearer to voters.”

She reaches for the envelope in front of her. The colour runs out of my old man’s face. He’s from that generation of men who were once aroused by brown envelopes but now live in fear of them.

She pulls out the documents. She goes, “I have here Charles O’Carroll- Kelly’s official tender to build and run Ireland’s first private prison. It will be where people will be imprisoned for non-payment of their water chorges if the Government is returned to power. Or, presumably, if New Republic gets the overall majority that Chorles has his hort set on.”

The old man goes, “Those documents are clearly forgeries. I’ve never seen them before in my life.”

“That’s interesting, Chorles, because your son took them from the safe in your study.”

He turns his head and looks at me. I give him the old motorist’s salute through the window. One finger can say so much.

“It’s called Aquatraz,” Sorcha goes. “Chorles, along with his director of elections, Hennessy Coghlan- O’Hara, wants to turn Lambay Island into a prison colony for people who don’t pay their water bills. He refers to it in his introduction as, ‘A Robben Island for the kind of people who don’t want to pay for bloody well anything!’ It’s got machine-gun towers and shorks – actual shorks, Seán! – patrolling it.”

“Stuff and nonsense!” the old man tries to go. “We just put those in to give the chaps in the Department of Justice a laugh. The same applies to the quicksand and the crocodile-filled moat.”

Seán O’Rourke’s there, “So are you saying, Charles O’Carroll-Kelly, that it is your hope to build and run this prison where Irish citizens – a great many of them voters, presumably – will be jailed for non-payment of water bills?”

“What I’m saying, Seán, is that these documents have been obtained by illegal means. It’s my intention to go to the High Court – Hennessy, if you’re listening, I’ll see you in the Chancery Inn in half an hour! – to obtain interlocutory relief to prevent this from becoming a story that detracts from the issues that really matter to voters, such as A New Way of Doing Politics and A New Republic – For All of Its Citizens.”

Sorcha just sits back with a smile on her boat while Seán O’Rourke gives the old man a kicking. He’s there, “How does this application for an injunction to stop us discussing this matter tally with your call for – what was it? – a new era of openness in politics?”

“I’m fully committed to openness in politics, Seán. But I’ve always regarded business as being rather like the rugby scrum – there are unsavoury things that happen in there that we should all just turn a blind eye to in the knowledge that they are probably for the common good.”

When they go to the ad break, the old man stands up and goes, “Sorcha, you may just have deprived this country of real change and a new way of doing, well, whatever the hell it was we said we’d do.”

She smiles at him and goes, “Good luck with the rest of the campaign, Chorles. I might see you at the count centre.”

I don’t think I’ve ever been more in love with her.