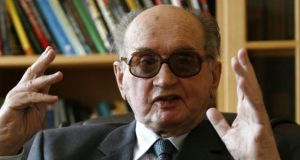 Wojciech Jaruzelski, the last communist leader of Poland, who has died aged 90, sent tanks to crush the Solidarity movement in 1981 yet went on to preside over the death of the system that had nurtured him.

Jaruzelski led a government that was deeply unpopular in Poland through most of the 1980s. For decades before that, as a career officer and party official, he had dutifully worked to impose communism on the Polish people, an effort that even Josef Stalin recognised as futile, likening it to “putting a saddle on a cow”.

On December 13th, 1981, the general declared martial law and ordered troops to suppress the powerful Solidarity trade union movement, whose demands for greater freedoms were alarming politburos from East Berlin to Moscow. “Our country is on the edge of the abyss,” he proclaimed in an address to the nation. “Strikes, strike alerts, protests have become standard. Even students are dragged into it. There are more and more examples of terror, threats, mob trials and direct coercion.”

Jaruzelski complained that his government, which had recognised Solidarity, had shown the movement too much goodwill, tolerance and patience. He asked, “How long can one wait for a sobering up?” Miners fired on The operations of Solidarity were suspended and its leaders arrested. Public gatherings were forbidden, publications censored, thousands of people detained and many schools and universities closed. Three days later, Polish troops fired at strikers occupying the Wujek coal mine shafts in southwestern Poland, killing nine workers.

By the end of 1983, however, thousands of detainees had been released, and many of the most repressive measures were eased. As Jaruzelski seemed intent on placating at least some Solidarity sympathisers, party hard-liners struck out against him.

Late in 1984, members of the secret police killed a popular pro-Solidarity priest, Jerzy Popieluszko. Much of the country interpreted the crime as a provocation organised by party hardliners against the liberalising policies of Jaruzelski. He rose to the challenge by having the police officers tried in open court, something that had never happened before in any communist country. All four were sentenced to long prison terms, setting another precedent. Advent of Gorbachev When Mikhail Gorbachev came to power in Moscow in 1985, talking of reform, Jaruzelski was quick to ally himself with him. By 1988, the atmosphere in Poland had changed even more. Opposition political groups, still technically illegal, were flourishing. And more strikes were called in Gdansk.

Over the objections of hardline party figures, Jaruzelski took the momentous step of opening talks with many of the Solidarity leaders he had once imprisoned.

After nine months, Solidarity gained the right to run candidates in parliamentary elections, the first truly free and democratic elections in any communist state. They took place in June 1989 and resulted in the defeat of almost all the communist candidates whose seats were contested. A non-communist majority formed a government.

In August 1989, the communists held their last congress. And although Jaruzelski was elected to the presidency, he refrained from using his considerable powers, deferring to prime minister Tadeusz Mazowiecki of Solidarity.

After serving only a year of his six-year term, the general resigned to open the way for a new and popular presidential election, which was won by the Solidarity leader Lech Walesa. The same general who had crushed Solidarity had permitted Poland to shed communism relatively bloodlessly, setting a pattern that was soon to be followed by the rest of the Warsaw Pact states. Jesuit education Wojciech Witold Jaruzelski was born near Lublin in 1923, the son of an estate manager. An only son, he was educated by the Jesuits. When German and Russian forces divided up Poland between them in September 1939 the family was deported to the east. Jaruzelski’s father died from dysentery, contracted in a labour camp, in 1942, while he himself contracted snow blindness, which forced him in later years to wear dark glasses.

Jaruzelski became an officer in a new Soviet-sponsored Polish army, which fought alongside the Red Army in campaigns in Poland and Germany. He was wounded and decorated several times for bravery.

Elected to parliament in 1961, he became minister of defence in 1968. In 1970, when workers in the Baltic ports took to the streets, troops shot and killed at least 44 of them.

A year after this violence, Jaruzelski became a full member of the politburo, and in 1973, he was promoted to four-star general. In February 1981, he was named prime minister and shortly afterwards became head of the party. He now held unprecedented power as head of government, the party and the military.

Though many continued to blame him for the imposition of martial law others credited him with preventing a Russian invasion. In 1992, a polling firm in Warsaw reported that 56 percent of those surveyed regarded his decision on martial law to have been justified. Some former Solidarity dissidents even began to speak well of him.

In 1994, he declared: “I am absolutely sure that the best opinion is expressed about anyone after his death. Because I am past 70, probably in the near future they will talk about me even better, when am in the cemetery.”

His survivors include his wife, Barbara, and his daughter, Monika.