Morale in my house is at an all-time low. Time to tell each other how we really feel? 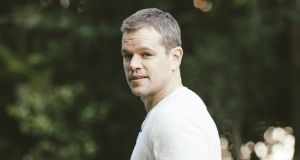 Matt Damon: the actor has fecked off home after living in lockdown in Ireland. Photograph: Elizabeth Weinberg/NYT

A deadly adrenaline buzz underpinned the first part of the pandemic. It is a natural reaction when the world turns suddenly on its head. That end-of-days feeling laid some people low. But, looking back, I can see how it energised me. How fear propelled me. How I became bigger on the inside by the unfolding of the unknown outside.

My role was clear to me. I would be the strong, dynamic one. The rock in my house that people could lean on, draw energy from, unload on. As reality hit home, something primal inside me began to slowly expand. Call it a matriarchal fierceness, a kind of mother-clucking big hen energy, even as foxes stalked a deserted Grafton Street. I fed off that feeling of strength and surety even while chaos and uncertainty clamoured at the door of our little coop.

Everything is different now. It feels as though the primal tank is empty. Like I’ve run out of road. I’ve let everything go to seed – and I am not just talking about the thyme in the yarden

Everything is different now. It feels as though the primal tank is empty. Like I’ve run out of road. I’ve let everything go to seed – and I am not just talking about the thyme in the yarden, or the wild flowers that turned out, in a disappointing twist, to be common-or-garden weeds.

They are not flowering. They are not providing the riot of colour I was expecting. I envisaged tall red poppies like the ones in the Blessington Basin. I expected various blooms I’d never be able to name. They have not materialised. Those green, stubby shoots once so full of promise have let me down by staying exactly as they are and not emerging from the chrysalis. There was no chrysalis, it turns out, except the one in my own head.

The routine I created so carefully for us in the beginning has dissolved into gentle anarchy. And that is on a good day. Gentle is not a word I would use to describe the anarchic energy of the other, grimmer days in this house. Stop shouting. I’m not shouting. Except I am. Maybe we all are. “I’m sick of you,” one daughter said, lashing out at me the other day. I couldn’t even be offended. It seemed a perfect summation of where we find ourselves now.

You see, in the worst of times I was at my best. Gathering the tribe at mealtimes, giving motivational talks, leading mini-meditations. Inspired by a long trip, before I was a mother, to India, where I attended several satsangs, I had my own family spiritual gatherings. We bonded as a collective, the rhythm set down by my partner and me, an all-in-this-together drumbeat setting the tone for the days.

In my prepandemic life I tended to escape domesticity at every precious opportunity, but now? Now I had nowhere to run. So we made soup together. Wrote songs together. Baked cookies. We were a cottage industry, surviving, if not thriving, a common national purpose motivating us all.

It felt necessary then. Essential. But with lockdown easing, cars clogging the quays again, the noise of neighbourhood parties spilling over the back wall, the other world is creeping back in. An adjustment is clearly necessary. But before the adjustment a pause for reflection. Something is not quite right.

Back when it all began I dreamed a lot about drowning. I would wake gasping for air but also elated, knowing that I was alive, that I was still here. Twice in my life I have nearly died in the sea. Once, as a child around my daughter’s age, I saved my own life, and once, in my 20s, I saved both myself and another person by accessing that same pandemic energy.

Can we pause and admit how hard it was and will be? Even for the most privileged of us, but especially for the most vulnerable, the older and the alone, the grief-stricken and the walking wounded

It’s good to be good in a crisis. But this next phase, although not as dramatic, requires a different kind of stamina. The summer stretches ominously before us, on this so-called bank-holiday Monday of socially distanced picnics and barbecues and bags of cans.

Uncertainty abounds. About summer camps, about schools and colleges, about lost jobs and opportunities, about pandemic payments and the looming pandession, about second waves and sickness and about the world we are coming back into. The thought of it, the unaswered questions about how we are going to move through it, feels overwhelming.

Are you tired? I think maybe we are tired. I feel as though I’ve been holding my breath too long, pushing through, trying to stay strong. And maybe it has been more exhausting than we’d like to admit. Is there time now to take a breather? Can we pause and admit how hard it was and will be? Even for the most privileged among us, but especially for the most vulnerable, the older and the alone, the grief-stricken and the walking wounded. The ones in the trenches.

I don’t know what else to tell you. Morale around here is at an all-time low. Even Matt Damon has fecked off home.

I don’t mind admitting I felt much more at home in crisis mode than I do at the precipice of whatever this next part is. New strategies are required. We need to mind each other, now more than ever.

And the most important part, the crucial starting point, in this strange, not-quite-right time, might be finding the courage to tell each other the truth about how we really feel.