Princess Khumalo: ‘Direct provision does not define me’

A Zimbabwean woman in direct provision talks about a system that treats asylum seekers as ‘economic migrants, second-class nationalities and opportunists’ 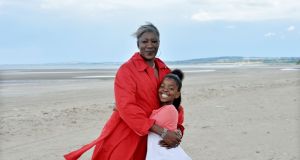 Princess Khumalo: with daughter Ivana at the beach near Mosney refugee centre, where they share a small house. Photograph: Alan Betson

Princess Khumalo stood in the queue for passport control at Dublin Airport, trying to figure out how to explain her dilemma to the Irish authorities. When she saw the immigration official gesture towards her, she grasped her daughter’s hand and walked over to the cubicle. She admitted to the man that she and her daughter were travelling on false South African documents; that they were actually Zimbabwean and had fled the country, fearing for their lives.

The man who had accompanied them from South Africa to Abu Dhabi had promised a lawyer would be waiting for her on her arrival in Dublin. Instead she was faced with a passport official.

“They took photos of myself and my daughter, and the next thing they’re putting them in a brown envelope. I just thought this is the normal procedure.” The official asked her to follow him and began leading her and her daughter through a labyrinth of airport corridors.

“Suddenly I realised we were walking back up to a plane. The brown envelope contained my deportation statement. I asked ‘What’s happening?’ and he said, ‘I’m doing the right thing for you. I know you’ve been here before’.”

The official accused her of holding a British passport as he led her into the aircraft. She was stunned and struggled to argue with him. Their flight from Abu Dhabi had only arrived in Dublin Airport an hour before, and already they were being told to leave the country. An air hostess led them to their seats, but when she heard the pilot’s voice welcoming passengers on board, she awoke from her stupor, jumped to her feet and headed towards the front door of the aircraft. “I told the air hostess ‘I can’t breathe’. She asked, ‘Do you want a glass of water?’ and I said, ‘I don’t want water. I can’t go back to my country’.”

In a panic, Khumalo convinced the air hostess to call back the immigration official and reopen the doors. She and her daughter were removed from the aircraft and she was locked in a detention room. Eventually she was given access to her luggage, from which she produced her real Zimbabwean identification and birth certificate. After giving fingerprints, they were brought in to central Dublin to register with the Department of Justice and then transferred to the Balseskin direct provision centre. It was 2014, and for the first time in years she began to feel safe.

Khumalo was born into a middle-class family in the capital of Zimbabwe, Harare. She never wanted for anything as a child. Her father, who died when she was 10, worked in a tyre factory and was also a trade unionist and political activist. Her mother, a schoolteacher, was forced to leave her glamorous life as an air hostess after she married her husband.

“My mum was the first African air hostess in the 1950s,” says Khumalo. “It was a very glamorous job at the time, and she was so slim and tall. It was during the Smith regime, so it wouldn’t have been easy for her to just walk into an airport and look for a job as a black woman.

“Whenever she spoke about her job, you could see it made her excited. But then she met my dad. She had to leave the job because you were not supposed to be married as an air hostess, you had to be single. So she made a choice. I think she regretted it, but she was a very strong-willed person.”

Khumalo’s family came from the Ndebele tribe and were descendants of the last king of the northern tribe, Lobengula Khumalo. Her father was deeply proud of his heritage. He was imprisoned in the 1960s for his political activism and went on to play a role in founding the Zimbabwe African People’s Union political party.

After her father died, she began playing basketball and quickly discovered she had a natural flair for the sport. By her midteens she was playing for the national squad, and in 1986 she was named Zimbabwe’s sportsperson of the year. Family friends encouraged her to pursue basketball professionally, but Khumalo was more interested in working in the local casino.

“I was too pig-headed. I met a friend who was working the casino, so I went and trained as a croupier and forgot about basketball.”

She met her husband at the casino and the couple had two children together.

In 2004 Khumalo’s mother, whom she describes as “my best friend and my role model”, died unexpectedly. Five years later her husband died suddenly. Given the family’s political activism and involvement, she knew she and her two daughters were at risk. She moved the family to South Africa, where her older daughter, Tanya, now lives and works.

However, as the threats towards her and her daughters intensified, she realised it was time to move again. She paid a travel agent €8,000, and he arranged for Khumalo and her younger daughter to travel to Ireland.

Two years on, Khumalo is living with 10-year-old Ivana in a small house in the Mosney direct provision complex in Co Meath. “When I came to Ireland I didn’t really care where I stayed, I just wanted safety. Direct provision does not define who I am – it’s a transition period. It only defines the Irish protection system towards asylum seekers, how they perceive us as economic migrants, second-class nationalities and opportunists.”

Khumalo says complaining about direct provision will not change the system and that she would rather focus her energies into “positively transforming and developing” her own life. In September she will begin a course in legal studies at Drogheda Institute of Further Education. She also continues her political activism and earlier this year launched an Irish branch of the ZAPU party.

“Zimbabwe has faced human rights violations since 1982, and I believe it’s time to make people understand that we are tired of Mugabe’s regime. I come from a background where we are strong-willed people, achievers, fighters, leaders and proactive. I have already positively transformed and developed my life in direct provision.

“As an African woman from Zimbabwe, my ethnicity, my beliefs, my language, my cultural values, the colour of my skin and my human kindness define who I am. But that does not give anyone the right to categorise me as unsophisticated, uncultured, uneducated, unrefined or uncivilised.”

Sealing the deal: how to buy a house at the right price
5

Róisín Ingle: The resilience of my children has taken my breath away
9

Love languages: Are you a gift-giver, or do you take out the bins?
10

What will €185,000 buy in Antigua, France, Italy, Spain and Co Waterford?
Real news has value SUBSCRIBE