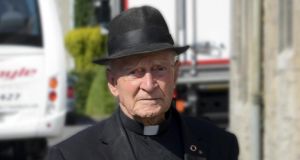 When a person with a richly layered life dies, the phrase “ renaissance man” is often deployed to unite the whole.

With the passing of John Chisholm, a more apt summation of his 92 years might be that he was a “man for all seasons”.

First there was his priesthood – his was a traditional Catholic faith – but also his interest in choral music, his philosophy and theology, and a body of significant historical research.

His hobbies included gardening, growing fruit and vegetables and making jam, watch and clock repairing and overseeing building projects for members of his family.

A polyglot who proudly sported a gold fáinne, his other languages included a good mastery of Croatian, in which he heard confessions. He died while on a visit to the Marian shrine at Medjugorje, in Bosnia Herzogovina, where he had been ministering to pilgrims from Ireland during the last decades of his life.

John Chisholm was born in 1922 in Dublin to Mary (née Brennan) and Edward Chisholm. After attending O’Connell CBS in Dublin, he entered the Spiritan order and was awarded a BA in philosophy by UCD in 1944.

He taught for a while at Blackrock College in Dublin, obtaining a diploma in education. He was ordained in 1949, and taught theology and philosophy to student missionaries at the Spiritan house in Kimmage, Dublin.

Anxious to learn more about the troubled “birth of the nation” Chisholm interviewed survivors of the notorious Kilmichael ambush in November 1920, as research leading to participant Liam Deasy’s memoir Towards Ireland Free (1973), which Chisholm edited.

Historian Peter Hart later relied in part on the “Chisholm interviews” to support his assertion that IRA leader Tom Barry had ordered the killing of helpless prisoners. This is hotly contested, but Chisholm’s timely research remains an essential source for a difficult period.

More recently, when lesser men were winding down, he switched track from academic work to pastoral ministry.

His energetic promotion of the Marian devotion at Medjugorje, where six local people are said to be in communication with the Mother of God, who bade them to pray and do penance, brought him into conflict with bishop of Mostar Pavao Zanic. The local prelate had little time for apparitions, whether they occurred in the Pyrenees or Portugal in the 19th century or 20th centuries or Bosnia in the 20th and 21st.

Some of Chisholm’s published work is still cited in academic publications. He gave public lectures in Oxford – including at the International Conference for Patristic Studies – Ireland, Fribourg in Switzerland and Rome.

His formal retirement took place in 1988, but this was really a fiction – he carried on trying to find new ways of doing what he believed in until the day he died. John E Chisholm is survived by a sister, Helen, and his brothers, Patrick and Cyril.

Keto diet: What is it and does it actually work?
9

The Great British Bake Off: The contenders to become the new host
10