Corkman says he ‘still has dreams’ about the Leaving Cert 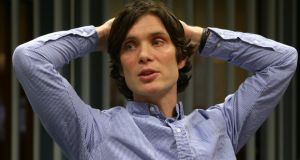 Actor Cillian Murphy at NUI Galway for the screening of Broken, which was followed by a conversation with the young audience on issues raised in the film. Photograph: Joe O’Shaughnessy

When actor Cillian Murphy walked into a lecture theatre full of teenagers in Galway several nights back, it was the few adults present who required the pep talk about behaviour.

“If you are over 20, you can’t open your mouth,” came the friendly warning from Prof Pat Dolan, director of NUI Galway’s Unesco Child and Family Research Centre, as a smile crept over Murphy’s slightly- over-20-year-old face.

The Hollywood star wasn’t there to discuss playing Scarecrow to Batman, or the androgynous “Kitten” in Neil Jordan’s Breakfast on Pluto, or what it’s like to work with Robert de Niro, Sigourney Weaver or Johnny Depp.

Reality, rather than fantasy, was his remit as he hosted a “conversation” with more than 200 representatives of west coast youth groups, ranging from Jigsaw and Doughiska Youth Cafe and the Galway Youth Arts Alliance to the Castlebar Neighbourhood Youth Project from Co Mayo.

“I still have dreams about the Leaving Cert . . . it traumatised me for life,” Murphy had recalled beforehand, describing how he came to be patron of the Unesco centre after a discussion with Prof Dolan almost five years ago.

Youth researchers
A shared interest in and concern for the rights of young children to have a safe and happy childhood, along with a belief in the Unesco centre’s focus on nurturing youth researchers and making youth-led YouTube video clips to transmit their findings, were key reasons for his involvement.

As a father of two young boys, Malachy (8) and Aran (6), – both “unbelievably wise” – Murphy said he was conscious of the fact that adults do “a lot of talking down to their kids”.

Context for the evening’s discussion was a screening of Broken, the 2012 “coming of age” film directed by Rufus Norris with screenplay by Irish writer Mark O’Rowe.

Bullying, betrayal and loss of innocence are themes of the tale, told through the eyes of a young English schoolgirl named Skunk, powerfully portrayed by Eloise Laurence, with Murphy playing her teacher.

“A very moving script . . . and a very honest portrayal of different versions of family”, was how Murphy summarised the plot when interviewed by Foróige drama club members Lucy Kelly (15), Katie Place (16) and Amy Mannion (16).

“I remember being younger, and you do know a lot, even though sometimes you think you know everything,” Murphy said. Broken focuses on that particularly painful period in children’s lives when they discover that “adults really don’t know anything”, he noted.

In questions from the floor, the actor was asked about his views on the film’s depiction of loss of innocence – “sensitively handled . . . and empowering”, he said.

Universal issues
He had found the film’s dramatic conclusion “hard to watch”, he admitted, and, though set in suburban England, it addressed “universal” issues about the difficulties of growing up.

Murphy had been the same age as many of the students – in transition year in Presentation Brothers College, Cork – when his “imagination was first fired” by a visit to the school by Pat Kiernan of Corcadorca Theatre Group. It was Kiernan who, after some pestering, gave him his first big break on stage in Enda Walsh’s Disco Pigs.

So what was the Corkman’s advice for budding young actors?

“Persevere,” he said. “Make films on phones, put them on YouTube, keep telling stories . . . and keep having a laugh.”