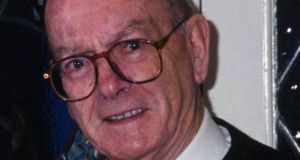 Paddy Terry: his career was one of high achievement. It was also unique in that it continued long after normal retirement age and spanned over 70 years of public service.

Paddy Terry (March 11th, 1920 – September 28th, 2020), a former senior official in the Department of Justice and parliamentary draftsman in the Attorney General’s Office who made a major contribution to justice policy, administration and law reform, has died aged one hundred years.

His career was one of high achievement. It was also unique in that it continued long after normal retirement age and spanned over 70 years of public service. Paddy first retired in 1985 after a full generalist career, nearly all in the Department of Justice, culminating in 15 years as assistant secretary there. He then went on to spend over 20 more highly productive years as a specialist, first as a legal adviser and then as a parliamentary draftsman, retiring finally in 2008, aged 88.

Paddy was born in Abbeyside, Co Waterford, in 1920 and received his secondary education from the Christian Brothers. At the age of 17 he moved to Dublin and joined the civil service as a clerical officer in the Revenue. He furthered his education, acquiring a Diploma in Public Administration, a B Comm and a BA from Trinity College. In his mid-twenties he was assigned to the Department of Justice as an administrative officer and progressed through the ranks, working in several areas of the department over the years and developing a comprehensive knowledge of its range of work.

He was called to the Bar in 1955 and throughout the 1960s he played a central part in developing and delivering the department’s law reform programme, which had a high political profile at the time under ministers Charles Haughey and Brian Lenihan.

He was promoted to assistant secretary in charge of the Prisons Division in 1970 and worked with then-minister Des O’Malley in the very difficult early years of the Northern Ireland Troubles when riots, hunger strikes and attempted breakouts were a recurring feature and a serious political problem.

Early in 1973, following Ireland’s entry to the European Communities, he was chosen to head the department’s newly formed EC Division. In essence, Paddy was responsible for steering and managing Ireland’s transition into the EC in the justice area, which he did very effectively, drawing on his legal expertise and previous experience dealing with the Council of Europe in Strasbourg. Subsequently he headed up the law division, managing a wide programme of law reform, mostly in the criminal sphere. This included working with Michael Noonan on the Criminal Justice Act 1984, dealing with Garda powers relating to people in custody and safeguards for the rights of those detained.

On reaching retirement age in 1985, his deep knowledge of the law and finely honed drafting skills were considered too valuable to lose. Soon afterwards his services were retained as a legal adviser and later he worked with minister Mervyn Taylor in the new Department of Equality and Law Reform, preparing legislation on matters such as employment equality, the matrimonial home, maintenance and powers of attorney.

In 1997, he was engaged on contract as a parliamentary draftsman in the Attorney General’s Office drafting the final text of legislation. Michael McDowell as attorney general and later as minister for justice regarded him highly as an utterly reliable, speedy draftsman. Paddy retained this role until his final retirement in 2008. By then his total contribution to shaping Ireland’s statute book was immense. Thereafter he retained his lifelong interest in public affairs and often responded to public consultations in his capacity of interested citizen.

Throughout his career, as a pillar of public service staff associations, he was deeply committed to defending and furthering the rights and interests of people across the Civil Service. He served as chairman of the Association of Higher Civil Servants and later a member of the Council of the Retired Civil and Public Servants Association. He was deeply trusted by association members and highly respected by the management side.

On the occasion of his hundredth birthday last March, Paddy was presented with a distinguished service award from the Minister for Justice and the Attorney General jointly. It was a fitting recognition of his many decades of dedicated service to the public good and he treasured it.

He had a wide range of interests outside of work – politics and current affairs, cinema, reading, music, television, travel. And, of course, Waterford hurling. He was almost unfailingly good-humoured and witty, with a droll deadpan sense of humour even in the worst crisis.

He got on very well with people, including the many ministers he worked under (over 20 in all) and he was a source of wise advice and an encouraging mentor to generations of civil servants. He had a very open and enquiring mind and remained young at heart, with a great zest for life.

His wife Kay pre-deceased him in 2010, and he is survived by his children Siobhan, Emer, Sean and Brian, six grandchildren and many friends.

After such a long and valuable life, it was a great blessing that he died peacefully at home.