Not goodbye, but au revoir

Outgoing French ambassador reflects on her time in Ireland 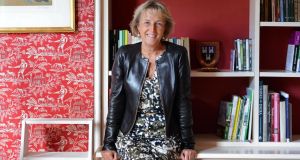 Ambassador Emmanuelle d’Achon will return to Paris today, leaving France’s historic friendship with Ireland even warmer and deeper for the care she lavished upon it.

D’Achon was the first French woman ambassador to Dublin. For three years, she has brought charm, grace and enthusiasm to a job that some of her predecessors considered a jumping-off point for retirement.

D’Achon is not retiring. She has been promoted to deputy secretary general of the French foreign ministry, the second-highest post for a career diplomat.

The French and Irish agriculture ministries have long been in close contact – Common Agricultural Policy oblige – but d’Achon has also helped to strengthen alliances between the ministries of finance and the treasuries.

The old parliamentary friendship associations, once little more than pretexts for tourism, fostered political fact-finding journeys by the heads of the French foreign, European affairs and finance committees. New cultural partnerships were struck to bring successful Paris exhibitions on Gen Charles de Gaulle and the pioneering Irish designer Eileen Gray to Dublin. And d’Achon has made the ambassador’s residence one of the most popular stops on the annual Irish Architecture Foundation’s Open House Dublin event.

“I said to my staff: ‘Get out. I don’t want to see you in the office. Get to know Irish people,’ ” d’Achon says. She criss-crossed the island, and believes Ireland is at a turning point, evolving towards secularism and gender equality, while returning to a sense of solidarity. “There’s been an acknowledgement that the Celtic Tiger years went too far,” she says. “People tell me, ‘We became too money-oriented. Let’s get back to what’s important.’ ”

Abortion became legal in France in 1975. D’Achon says it’s a delicate topic. “We don’t want to interfere in a national societal issue,” she says. “There was pressure from Europe to at least pass legislation in conformity with European law. And that’s what the present Government has done. That was courageous enough for the moment.”

Prestigious family
D’Achon’s informality and warmth belie the fact that she was born into one of France’s most prestigious families, the Michelins, founders of the tyre company and tourist guidebooks. Her grandfather, Marcel, founded the Clermont rugby team, and the Stade Marcel Michelin is named after him. She gently evades a question about her husband Jean-Eude’s aristocratic name, saying, “That doesn’t mean anything anymore.”

Both civil servants, the d’Achons managed to coordinate her role at the foreign ministry with his career at the finance ministry – and raise three children.

As Taoiseach Enda Kenny has visited Berlin six times and Paris only once. An Irish observer suggests the Government has delegated Franco-Irish relations to Eamon Gilmore, because he’s a socialist.

D’Achon offers a different explanation: Germany was the more reluctant partner in the EU bailout. “President Francois Hollande clearly said to Enda Kenny: ‘You have my support. I understand you and I am going to help you get out of the banking crisis.’ ”

Nicolas Sarkozy was still president when d’Achon came to Dublin, and his insistence that Ireland raise its corporate tax rate was a source of tension. So too was the perception of a big power takeover of Europe under what some observers called “Merkozy”.

“I am very aware that the Sarkozy-Merkel couple was resented,” d’Achon says. “Francois Hollande is trying to change that image.”

D’Achon gave priority to her husband and children, but decribes herself as a feminist. “You have to be, in our century,” she says. “It means helping young women to believe in what they can do. They have a lot of potential. It’s very important to help them; too many stop along the way.”

D’Achon’s says her best Irish experience occurred in Aclare, Co Sligo, when the village inaugurated a memorial to an unknown French soldier who marched with Gen Humbert’s troops in 1798.

“It was so moving that I cried,” she says. “Then we went to a pub where the whole village played music and danced reels, young and old. It was extraordinaire. Every time I land in Dublin I think, Do Irish young people realise what they have at home – these moments of true fraternity and solidarity?”

D’Achon will represent France at cyber security talks in Korea next month, will head consultations with several African countries and coordinate international commemorations of the centenary of the first World War. A believer in gender quotas, she’ll keep tabs on implementation of a new rule requiring that 40 per cent of top foreign ministry posts go to women.

She will return to Ireland, she says, for draughts of peace and quiet, fresh air and walks by the sea. In the meantime, for her Irish friends, d’Achon will be just a phone call away. “If you need a go-between in Paris,” she told the France-Ireland and Dublin chambers of commerce at lunch in her residence on Thursday, “Please use me.”