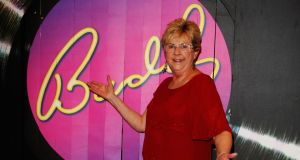 Peggy Sue Gerron Rackham, who became part of Buddy Holly’s circle of friends as a teenager and long revelled in having her name used as the title of one of his biggest hits, died Monday in Lubbock, Texas. She was 78.

Her son-in-law, Tom Stathos, confirmed the death but said he did not know the cause.

As Rackham told the story, she was a sophomore at Lubbock High School in 1956 when she first encountered Holly, who had graduated a year earlier. She was walking to the school’s band room – she played alto saxophone – and he was rushing to the auditorium to attend an assembly.

He crashed into her, sending her to the floor, her books scattering and her poodle skirt rising over her knees.

“I’m terribly sorry, but I don’t have time to pick you up,” he said, as she recalled the moment in her autobiography, Whatever Happened to Peggy Sue? (2008). “But you sure are pretty.”

He headed off. But she would get to know him better when she realised soon after that her boyfriend, Jerry Allison, was the drummer in Holly’s band, which would become known as the Crickets.

Peggy Sue became “Peggy Sue” a year later. The Crickets were in producer Norman Petty’s studio in Clovis, New Mexico, preparing to record Cindy Lou, a song the group had been performing. (Its title was reportedly a combination of Holly’s niece’s first name and his sister’s middle name.)

But Allison was hoping to solidify his on-and-off relationship with Peggy Sue and asked Holly to change the song’s name.

“I think Buddy liked it because he knew me,” she told the website MusicDish e-Journal in 2004. And, she added, Allison “always said, ‘Peggy Sue rhymes with everything.’”

Holly died in February 1959 in a plane crash in Iowa, along with his fellow singers Ritchie Valens and the Big Bopper (JP Richardson). Rackham said she toured with the Crickets for a while after Holly’s death, counting tickets at the gate among other jobs.

Peggy Sue Gerron was born on June 15th, 1940, in Olton, Texas. Her mother, Lillie (Rieger) Gerron, was a homemaker, and her father, John, was a civil engineer. Over time, she worked as a dental assistant and owned a plumbing business with her second husband, Lynn Rackham.

Rackham’s memoir, written with Glenda Cameron, was published shortly after Peggy Sue turned 50. To recall her time around Holly and the Crickets, she said, she used about 150 contemporaneous diary entries.

Holly’s widow, Maria Elena Holly, threatened to sue Rackham over what she said were false claims in the book.

“He never, never considered Peggy Sue a friend,” she told the Associated Press.

Ultimately, Holly declined to sue because she thought the publicity would have helped Rackham sell books, her lawyer, Richard Wallace, said in an email.

Rackham sustained her connection to Peggy Sue in other ways over the years. She judged a Buddy Holly look-alike contest, helped promote the musical Buddy: The Buddy Holly Story in Australia and appeared on Geraldo Rivera’s television programme with the women behind other rock ‘n’ roll songs, such as Angie, Barbara Ann and Donna.

She is survived by her daughter, Amanda Stathos; her son, Von Rackham; five grandchildren; and six great-grandchildren. Her marriage to Rackham ended in divorce.

A song as popular as Peggy Sue ensured Rackham a dollop of everlasting fame.“It’s very hard to stand still,” she told the BBC in 2009, “when you’re listening to Peggy Sue.”

Cycling or swimming, walking or yoga: What is the best exercise for you?
10