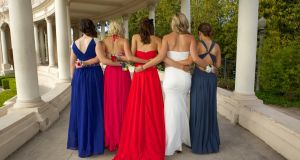 The Debs: I was glad to see at least one tradition had survived – the naggins strapped to the leg

Naggins, dodgy upstyles and smudged lipgloss – those are my abiding memories of the grad. We call it the grad, but you might call it the debs or the prom – either way, you know the summer is coming to a close when these are in full flight.

What’s more, you know you’re getting on when your baby sister is going to it, and not you.

I pride myself in being one of the youngest in the office; mentioning it at every turn as if it were some kind of achievement and making seething jokes about my other colleagues being old.

I’ve always been well aware that all this gloating would eventually come back to bite me, but not as quickly as this.

There is no woman more adept at making me feel old than my little sister, who I thought would remain an annoying little twerp of a 10-year-old forever.

It turns out, though, that she’s the cool one now and I’m just faffing about trying to get my eight hours kip and wondering how she’s not perished in that crop top.

“Don’t forget to come home or Mum will kill you,” I told her, as she checked her clutch purse for lipgloss, lashes and ID.

Ellen was off to her grad, cool as a cucumber, without an ounce of fuss or pomp, while I scurried around her wondering if she had enough money and if there was room for flat shoes in the bag.

God, I even feel old and boring just writing that. How could it be a whole seven years since my own school leaving?

There was no silver Claddagh rings or diamante studded waistbands, no clear bra straps or fresh blonde streaks in her hair.

Her dress was simple and elegant, not like the bell-sleeved, silken nightmare I remember wearing.

There was no misplaced blue eyeliner or egregious red lipstick to match the shoes.

It was all subtle contour and flattering highlighter, muted nude matte lipstick and individual fake lashes.

Surely this was an abuse of the rite of passage? How could this be a grad without the visible knicker line or the orange coloured sweat patches on the underarm fabric?

Where was the matte mousse foundation and over-plucked eyebrows? The side-fringe and the layers in the hair that looked like a staircase?

I was glad to see at least one tradition had survived – the naggins strapped to the leg. At least I’m not too old and uncool to be shocked by that.

“Well in fairness to Ellen she’d never do anything stupid, it’s great that we can trust her,” Mum said after she had left, reassuring herself and no one else.

I forced a nod of agreement and rolled my eyes when she turned her back. The secrets you’ll keep for a sister, eh?

Nobody needs to keep secrets for me anymore. Long gone are the days of drinking Jack Daniels in a field with the neighbours, under the guise of some mid-summer “camping”.

I would argue, though, that getting pissed drunk in a field with your mates is as close to “finding yourself” as any of us may ever get.

Not now though, oh no.

I couldn’t look at the sight of a drippy tent in a big soppy field – no amount of bourbon could lure me to those depths now.

I think about really old, boring things like where is best to buy fresh fish and how to get an extra month out of my bedding plants on the balcony.

Don’t get me wrong, I love a sup as much as the next 24-year-old, but the aftermath is beginning to turn into a two-day affair these days.

Day One of the hangover I can embrace; you accept the cravings for shit food, you wash the muck off your feet, mop up the puke in the hallway and throw away last night’s cans.

You can almost go to bed satisfied at a hangover day well spent.

But Day Two? Day Two, when it comes, is a fresh hell you never accounted for.

It’s that dry feeling in the mouth, the dull thump of a headache that never really went away and the inability to concentrate on anything other than what, exactly, am I doing with my life?

Give it a week though and you’re just about recovered and good to go again.

Ellen though? She wakes up the morning after her grad, having not gotten in the door until sunrise, makes a fruit smoothie and a cheese toastie and carries on like everything is totally fine.

Strangely enough, that’s because everything is fine for her. No puke, no crap food, no thump of doom in her head.

Perhaps she’s right, maybe I am getting old. Or maybe I just need to toughen up and get on with it. When it comes to the drinking championships, it’s those long dark nights in winter that stand to you. May the best woman win.