‘I thought I’d take Dublin by storm when I arrived. It didn’t work out that way’

New to the Parish: Rachel Waite arrived from the US in 2011 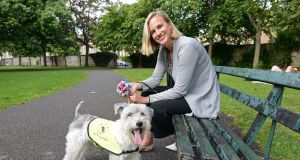 When Rachel Waite was 10 years’ old, an Irish family moved into her local area. She briefly met the McCarthy boys while in primary school but it wasn’t until she reached high school that she started spending most of her free time in the family’s pub.

“Their parents lived in a house a few minutes away but they had an apartment above the bar and the boys stayed there. We’d be there every single weekend. It felt like these are my people. I didn’t realise how much Irish culture I had ingrained in me already before coming here. I tell people now I actually grew up in an Irish pub in America.”

Waite fondly recalls the live traditional music at McCarthy’s pub, which was situated on the outskirts of Milwaukee in the state of Wisconsin. “Their mum was really deadpan funny and the dad was a comedian and musician and was always up on stage singing. For me, they were the happiest memories of growing up. I consider myself an introvert but that was one stage in my life where my personality really developed.”

Despite her strong connection with the McCarthy family, Waite had little interest in moving to Ireland during her 20s. She travelled extensively around the United States and loved her marketing job with the Milwaukee Bucks, the professional basketball team based in her home town. “I got the dream job right out of college. Overall, I had a great life, always going out with friends and rent was very affordable back then. But I just kind of got to a point in my life where I wanted to make a change.

“I had a lot of people tell me that I should go to New York or LA but it never really appealed to me. I just had that Irish connection.”

In 2011, Waite moved to Ireland, where she started working in marketing and sales with An Post. She viewed the position as a temporary bridge towards finding something more suited to her skills. However, with Dublin struggling to cope under the strains of the economic recession, finding a job was far more challenging than Waite had anticipated. “I left thinking this will be easy because I’ve had so much success in Milwaukee I’ll take Dublin by storm. But it didn’t exactly go that way.”

“I had to be humble, start over again, and keep persisting as there wasn’t a lot of opportunity at the time. I really had to stay resilient and keep going, even when things were really tough.”

Eventually, she settled on making a career change and found a job in retail. “I felt like I was 16 again, organising hangers and folding clothes. I started from the bottom and worked my way up to manager within three months. But I worked with all these strong, amazing women who were very supportive.”

In 2013, Waite went back to university and spent the following two years studying an MSc in digital marketing and analytics at the Dublin Institute of Technology. After graduation, she found a job in a tech start-up and went on to join the Client Solutions business. where she continues to work today.

Waite finds the work-life balance in Ireland to be far healthier than the lifestyle she led in the US. “I remember not being able to turn off in the States. I was always so focused on my job I never really got the chance to relax. I feel more inspired by my work here whereas before I was always going.”

In her spare time, Waite volunteers with the National Council for the Blind of Ireland (NCBI). “I really wanted to put down roots here and get involved as much as I could. My grandmother went blind aged 85 and used services very similar to what the NCBI provides. I had been looking to get more involved in the community and it was a really good tie-in because I’m sitting on the retail board. I got my love for second-hand clothing from my grandmother, who used to take us to Goodwill stores back home so it was the perfect fit.”

Waite also brings her dog Rooney, who is a qualified Irish therapy dog, to a nursing home in Ranelagh every Saturday. “I got him a month after I moved here and he was born around June or July so he is as old as I have been in Ireland. He’s about 25 pounds and barely listens to me but he’s so cute and they all love him in there. A lot of the residents had dogs but they’re not allowed pets in the centre so he comes in and spends a few minutes with each person. He gets so much love there.”

Waite has watched Dublin “completely transform” during her eight years in the country, from a city in the depths of recession to a booming tech hub. She has also watched the population diversify as people from around the world make Ireland their home.

“When I first came out here I was concerned about diversity because I thought Ireland would be 99 per cent Irish Catholic. But even back in 2011 I was shocked. A lot of my friends come from other parts of Europe and I have friends from Nigeria. It was far more diverse than I thought so that was a pleasant surprise.”

In May 2018, Waite travelled to Kerry for the citizenship ceremony in Killarney. “It was such a proud day, it meant so much for me. In the speech they talked about when the Irish emigrate they bring their songs and dances wherever they go. The Minister said now we have to bring our songs and dances to Ireland, which I thought was just amazing. When I look at what’s happening back home it’s nice that diversity and inclusion are promoted here. It makes you feel a sense of belonging.”

Waite now considers Ireland home and says she couldn’t imagine living in any other country. “I work in marketing where you have to brand yourself so I coined the term ‘born in Milwaukee, made in Dublin’. I’m not going to lie, it’s been tough. I see all my friends in the US buying homes and would love to buy a house here. But I think the pros of living here outweigh the cons. I really feel like through all the experiences, the ups and downs, the hardships, I just kept going and it really strengthened my character.”