My body is a sagging bicycle shed, graffitied over with years of toxic neglect

Hilary Fannin: I can’t put off thinking about resolutions much longer 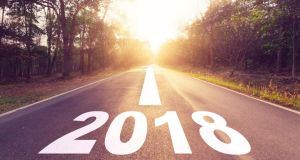 New Year: I had a drink to steady my incipient panic. I’m not going to be able to put off thinking about resolutions much longer. Photograph: Getty

We sat in a small tapas restaurant and ordered calamari and whitebait. Fairy lights were pinned to the ceiling in long even rows, and beyond the large clear window I could see the trawlers bobbing in sleep, nudging up against the pier wall. The zigzag reflection of the lights into the clear navy-blue night made it seem, at first glance, as if the trawlers themselves were festooned in twinkling lights, their masts lit like ghostly Christmas trees in the cold black harbour.

I am keenly aware of my luck. A random accident of birth and geography, and here I am, steeped in privilege, eyeing up an ice bucket at the start of another new year.

I was dining with a friend who lives in London and whom I don’t see very often. In his 60s, he epitomises what a healthy lifestyle can achieve. Crisp and well pressed, focused and confident, he seems to get younger each time I see him. He recently stopped running, he told me, and now turfs himself out of bed every morning at dawn for a fast 15km stride around his neighbourhood. It occurred to me, over the tiny shoal of whitebait, that if my friend’s body is his temple (albeit one with a few rough edges), mine is a sagging bicycle shed, graffitied over with years of toxic neglect.

My friend was telling me that, before long, humans will have minuscule computer chips floating around inside them, alerting us to potential illness and disease

I had a drink to steady my incipient panic. I’m not going to be able to put off thinking about resolutions much longer; this festive raft I’ve been afloat on is buckled and beginning to list.

My friend works in health and technology. This is an exciting time for him; in the saddle of a booming industry, he’s roaming fresh fields of technological innovation.

We talked about transhumanism and artificial intelligence and targeted therapies. He attempted to enlighten me about nanobots and genomics while I, with the concentration of a sluggish gnat, wondered what the future held for the old wooden trawlers moored together on the oily night water.

Trawlers are inscrutable beasts; they are more than fishing boats, more than craft. When you stand close to them and look at their bilge stains, at the rusting heft of their anchor chains, they appear gruff and alive and dangerous, like dogs that don’t want to come inside, somehow fearing their own feral nature.

My friend was telling me that, before long, humans will have minuscule computer chips floating around inside them, monitoring changes in the structure of genes and alerting us to potential illness and disease. Data from our DNA will be stored in the cloud, he said, our prospects shadowed by a virtual self.

If the microchips can be mass manufactured cheaply enough, he continued, their impact will revolutionise everything we have understood about life and death, about mortality. With exponential advances in technology, some say, a baby born today has the potential to live for 1,000 years. I looked down at our empty whitebait plate, thought with horror about all the resources these first-world babies engineered to live for centuries would use.

I’d hate to live for hundreds of years. I couldn’t imagine anything worse. Life would be one long lukewarm bath

The port and starboard lights were staining the water green and red. On the rise of the hill above the harbour, amber streetlights flashed like fireflies. I felt like I’d known this harbour forever. I used to walk up and down it, hand in hand with my father, when I was a little girl, stopping to pick up tails of spliced rope and put them in my duffel-coat pocket, or to look into the fish boxes at the severed heads of startled cod. We’d climb the big steps at the end of the pier and talk about dogs we liked and how he might make some money.

Man, I’d hate to live for hundreds of years. I couldn’t imagine anything worse. Life would be one long lukewarm bath. It would be like never knowing winter. It would be like waking up to one continuous Wednesday in March, an endless day of scattered showers and occasional sunny periods.

We left the restaurant, stepped into the crisp night and walked towards the street lights, ghosts scattering in our wake, drifting gull-like over the still waters.