In 2017, women found a voice and roared a collective ‘enough’

Jennifer O’Connell: Pushback against equality will be strong, sometimes from unexpected places 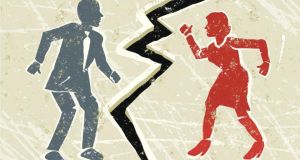 How sweetly naive it now seems that, this time last year, columns were being written about 2016 being the worst year in history. Oh, how we’re cackling now, at the tail end of this sorry excuse of a year; this long, mangy streak of a dozen miserable months.

But despite the gloom, despite the hate-filled Trump tweets (no, do stick around: I promise that’s the only time the Babybel In Chief will get a mention); despite the homeless children, the hurricanes, the terror attacks, the resurgent xenophobia, the threat of nuclear war, the preening sexual predators, the atrocities, the cracking ice, the starving polar bears, the world was not without hope.

Because if there’s one thing that should have given us heart this year, it’s that this was the moment women finally stopped being polite in the face of behaviour that is very definitely not; when we found a voice with which to roar a collective “enough”.

Not everyone is thrilled about the powerful, spontaneous social movement against harassment that emerged in 2017. If I had a euro for every time in recent months that someone – men and women, but mostly men – complained that women have ruined flirting; that there’s no such thing as banter anymore; that you can’t say anything for fear of being lambasted; I’d be Harvey Weinstein. I mean that in a purely financial sense.

As I said the last time someone made this point to me (a Dublin taxi driver, roughly 20 hours ago): if you respect women, if you genuinely and wholeheartedly believe in equality – not sameness; just equality – and don’t feel threatened by it, then you have nothing to worry about.

Because of the collective show of force displayed online and in person by women in 2017, the kind of men who get their kicks from harassment might, for a time anyway, feel a bit less inclined. They might need to find something else to do with all that toxic, pent-up, chest-beating energy – buy a flashier car, a bigger watch, set themselves up with an anonymous Twitter account through which to funnel their discontent. So long as they stop harassing women, it is enough.

Only it isn’t. Because harassment isn’t the problem; it is a symptom of the problem.

Harassment exists in the equality gap between the sexes. It is rooted in gender imbalance, and it won’t disappear until the default position becomes equality. It is no coincidence that the tensions between the genders have intensified at precisely the time when women’s reproductive rights are up for debate around the world, when we have stopped being so polite about gender pay disparities, the prevalence of sexual violence, the continued objectification of women.

None of these things exist in isolation. What’s happening here and elsewhere is that equality is finally within our grasp, and its proximity is casting a cold light on all the ways in which we still fall short. There are some people – men and women – who are unsettled by the sweeping changes that are coming; who would prefer things to stay the way they are.

Over the next few months, as the referendum to repeal the Eighth Amendment brings the prospect of equality even closer, those divisions will become deeper. The conversation will get uglier and more frustrating. The pushback against equality will be strong, and sometimes it will come from unexpected places. I had a conversation with a young woman recently who told me that she finds all “the stuff about feminism” in her Instagram feed embarrassing and unnecessary. “We get it,” she said, wearily.

I didn’t tell her that I don’t think she does get it: not unless she also finds it embarrassing and unnecessary that she has the freedom to pursue her career, be a mother to her three children, and make more money than her partner – while no one tries to tell her she can’t. But my wish for her, and for others like her, isn’t that 2018 is the year she declares herself a feminist. My wish is that she’ll stop being a second-class citizen before it ever dawns on her that she is one, that the movement for equality she regards as unnecessary and embarrassing will finally close the gap she hasn’t yet noticed.

My wish for my own daughters and my son isn’t that they grow up to be feminists; it’s that they don’t have to. We’re not there yet. But we’re getting closer.