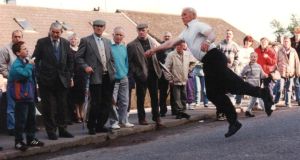 Mick Barry, who has died aged 95, was the greatest player ever to compete in the minority sport of road bowling, a 17th century game introduced to Ireland, as the story goes, by the soldiers of King William of Orange who relieved their boredom during a long siege by throwing canon balls. It is still played every Sunday morning on the winding country roads of Cork and Armagh.

As head gardener at UCC, where he worked for almost 50 years, Barry’s prowess at throwing a metal ball weighing 28 ounces with great accuracy and speed, convinced many a student and academic, including a former president of the college, to take up this little known but exciting game.

Its recent spread to Mayo, Waterford, Limerick, Wexford, Louth, Monaghan and Tyrone is due in no small way to the many fine qualities which Barry brought to the sport.

Born in Waterfall, a few miles west of Cork city, he began to make his name in the sport in 1937 and was virtually unbeatable for six decades until he retired from competitive bowling in 1997 at the age of 78.

In her funeral homily, Susan Greene, chairperson of the national Ból-Chumann organisation, described him as the greatest player she had ever seen.

Recalling that on St Patrick’s Day in 1955 he became the first to loft a 16-oz bowl over the 90-ft-high and 21-ft-wide Chetwynd Viaduct, known as the bowler’s Everest, she also reminded mourners of the time he lofted Mary Anne’s pub in Dublin Hill, thus gaining the edge in a tight game.

Bishop John Buckley of Cork and Ross, an aficionado of the sport, who often played against him in his cassock, said Barry had done for bowling what Christy Ring did for hurling.

A trade unionist and a modest family man who never drank or smoked, Mick Barry was, by any yardstick, one of Ireland’s most successful sportsmen.

His home was brimful of medals, cups, shields and other trophies from countless bowling victories. In the course of his long career, he won European gold and silver medals, including one for winning at the novel pursuit of moor-bowling in Holland during the first international championship played there in 1969.

Named Supreme Bowler of the Millennium by Ból-Chumann na hÉireann in 1999, Barry was known to followers of the sport as the “king of the road”.

One of his rare defeats was at Dublin Hill in Cork to another great player, the late Danny McParland of Armagh, where road bowling is called “bullets”.

The following year, however, playing for what was then a record stake of £1,700, Barry won the return score in Armagh, going on to become the most successful player in the history of the game. A superb athlete, he was immensely strong and light of foot and could throw the bowl with great speed and accuracy at a sop of grass placed on the road to guide the shot.

With spectators literally betting bundles of money on every throw of the bowl, Barry also had nerves of steel in a game where the winner is the player with the fewest shots to the finish line. Relishing the buzz of major competitions, he knew that fortunes could turn on a bounce of a bowl, sending it either around the next corner or into the ditch.

So highly regarded was he that UCC honoured him with an honorary Master of Arts degree and Cork City Council named a road after him.

Predeceased by his wife, Betty, and children Jimmy and Mary, he is survived by daughters Noreen, Kathleen and Anne, sons Pat, Michael and Seán, sisters Rita and Theresa and his brother Ned.