She’s hardly a subversive, but Melania Trump has failed in her first duty as first lady: to make the US president look good 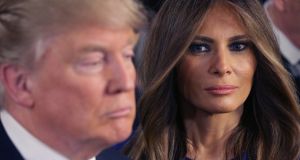 Any discussion of Melania Trump, who this week finally moved out of her Manhattan apartment and into the White House, has to deal with one persistent rumour first. Is she actually human?

Some on the Internet have their doubts. Google “Is Melania Trump a robot” and see for yourself. Much of the evidence focuses on her implacable, “robotic” gaze and “suspiciously stiff” movements.

Then there’s the boast by Donald Trump, in an on-air chat with Howard Stern in 2003, that she had never, to his knowledge, defecated (or, as Stern rather more lyrically put it, made doody).

But in recent months the 47-year-old has been doing her best to dispel conspiracy theorists’ (perhaps not entirely serious) suggestions that she was created in a lab with the sole purpose of making her husband look good.

Mostly, she has been doing this by ensuring she does not make him look good.

In American political life the role of first lady – described by the New York Times columnist Maureen Dowd as “an antiquated white satin box” – is stiflingly restrictive. It has traditionally involved two things. The first, and most important, job is to support and reflect well on the president. It might be going too far to call Melania Trump a subversive – or even to accuse her of conducting a stealth campaign to undermine the presidency, one hand swat at a time.

But her miserable expression and awkward body language whenever she is in her husband’s orbit do seem to be sending a message about what she really thinks of him. What’s less clear is whether she’s setting out to emasculate him or simply can’t help herself.

The second job of a first lady is to adopt a cause, something most women in the role – notably Michelle Obama and Hillary Clinton – have been eager to take on. Melania Trump said she intended to make cyberbullying her cause, but so far she has done nothing on this – not even wrest her husband’s phone off him to stunt the flow of vitriolic 6am tweets.

Melania Trump’s stubborn reluctance to rise to the demands of the role has surprised commentators on both sides of the political divide, who thought they knew exactly what to expect from her. As first lady she would be all sweetness and gentle smiles. She would be polite, pliant, silent.

Looking forward to the memories we'll make in our new home! #Movingday pic.twitter.com/R5DtdV1Hnv

And yet, despite the much-vaunted sweetness, her appearances at public events by her husband’s side have betrayed all the joy of a teenager dragged out of bed to perform a party piece at her parents’ dinner party.

A handful of awkward outings during the campaign – including the speech plagiarised from Michelle Obama – culminated in a series of toe-curling interactions at his inauguration.

In clips that went viral he bolts out of the car and strides up to greet the Obamas, leaving her to follow behind alone. She looked so grim that her presumed misery became an instant internet meme, with the hashtags #SaveMelania and #FreeMelania trending on Twitter.

Her refusal to don the mantle of the blissfully happy presidential spouse has made her a surprising accidental heroine of Trump dissenters.

She must know this. She certainly knows the cameras are always on her. But despite – or perhaps because of – this she keeps delivering. In May, as they walked along the tarmac in Israel, the president reached for her hand, and she swatted it away, prompting a viral sensation.

Less than 48 hours later, in Rome, he again went to take her hand, on the steps of the plane, and she deftly avoided it by reaching up to push her hair out of her eye. (Remember, we’re talking about a chap who is reportedly terrified of stairs.) Thwarted for the second time in two days, he retaliated by patting her on the bottom.

Last Sunday night, after finally giving in and moving to the White House, she – or someone with access to her Twitter account – tweeted a chirpy “Looking forward to the memories we’ll make in our new home!”

That she resisted for so long moving into the White House was, “in a weird way . . . a strangely feminist thing to do,” Kate Andersen Brower, author of First Women: The Grace and Power of America’s Modern First Ladies, told Maureen Dowd in the New York Times.

So who is the real Melania Trump? Is she pliant, polite and merely intensely private? Is she a stealth subversive? A strange sort of feminist? Or a woman caught in a miserable marriage to a man she, in common with much of the rest of the world, regards as a monster?

Her spokeswoman, Stephanie Grisham, repeatedly insists that none of this is true and that Melania is embracing the role of first lady.

Melanija Knavs was born in Slovenia, the daughter of a pattern-maker mother, Amalija Knavs, and a former communist-party member, Viktor Knavs – a man who kept Freudian theorists busy this week when he visited the US and turned out to bear more than a passing resemblance to Donald Trump.

Reportedly fluent in several languages, she studied design at the University of Ljubljana, before abandoning it for modelling. In 1995 she was spotted in Milan by a model scout who also happened to be a friend of Trump’s. She moved to New York, sharing an apartment with a photographer called Matthew Atanian.

Atanian described her to Vanity Fair as disciplined in her pursuit of her career – although hardly to a degree that was extreme by the standards of 1990s models. “She wore ankle weights around the apartment” and strictly ate “five to seven vegetables and fruits every day”.

Her modelling career was floundering – due to that “stiffness”, Atanian said – when she met Trump, in 1998. Their partnership seems to have given them both what they most wanted. She got, says Vanity Fair, “a luxurious home where she could indulge her hobbies – Pilates and reading fashion magazines . . . and a promise that she would never have to return to drab Eastern-European prospects”.

He got a quiet, sexy wife who would underline his manhood, hold his hand walking down those terrifying flights of stairs, and put up uncomplainingly with his boorish ways and his crude brags to Howard Stern about their sex life. (He once told Stern he’d still love her if she were maimed in a car crash, so long as her breasts were intact.)

Melania has become a symbol for most Americans, who are clinging to the hope that if they can only persuade her to dump her husband the country might follow suit

At least that’s what he thought he got. It may be giving Melania Trump too much credit to suggest she’s deliberately setting out to undermine her husband, a man for whom the image of his virility is everything. The most likely explanation for her behaviour may be the obvious one: she can’t stand him.

But, as the reluctant first lady, Melania has become a symbol for the majority of Americans, who didn’t vote for their president and who seem to be clinging on to the hope that if they can only persuade her to dump him the country might follow suit.

As Hollywood endings go this seems unlikely. But now that she has moved into the White House they can console themselves with the fact that there is undoubtedly lots more entertainment to come.

How will the ‘Ryanair generation’ of emigrants fare post-Covid?
Real news has value SUBSCRIBE