Why doesn’t the prospect of an ethnic taoiseach excite me?

Opinion: Leo Varadkar and I are both sons of immigrant fathers, but he’s no ally of migrants 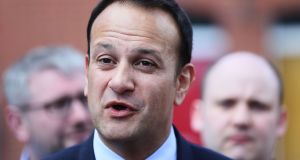 “Leo Varadkar has not shown himself to be a great ally of migrants living here, nor does he appear to have much interest in Ireland’s significant racial issues.” Photograph: Brian Lawless/PA Wire

Assuming he is elected Taoiseach as well as Fine Gael leader, Leo Varadkar will soon move into the big office in Government Buildings. In doing so, he’ll become our first ever ethnic minority Taoiseach - a huge milestone moment in Ireland’s continuing evolution into a more multicultural state.

In essence, Varadkar’s rise is the embodiment of changing demographics – the clear crystallisation of the significant societal shifts that have occurred in his lifetime.

For a country where anyone not 100 per cent white and Christian is still often seen as something “other”, the symbolism is undeniable. A generation ago, it was probably unimaginable.

Since entering the political spectrum, the current Minister for Social Protection’s racial background has rarely been broached. “Who cares as long as he can do the job?” is the general consensus – and rightly so.

That Varadkar’s Indian heritage has been talked about so infrequently in the Fine Gael leadership race is not nothing, particularly in an age when xenophobic bombast has infected western politics like a virus.

Still, his rise will not be lost on Ireland’s refugees, migrants and their children. At the heated core of almost every immigrant’s story is the hope for a better life in a land that will embrace them like a plush, warm blanket.

If the 38-year-old takes his place at the head of government, the significance for the naturalised Irish will be profound. That, to many people, is the meaning of Leo.

Like Varadkar, I’m a Dublin-born, half-Asian son of an immigrant father. And being some six-and-a-half younger than he is, you could just about say we’re members of the same generation.

While he was sharpening his political blades as a member of Fingal County Council back in the mid-2000s, I, like others since, was hustling for a part-time retail job with a CV that bore a more Irish-sounding surname to avoid any potential race-based bias.

Now, a man with an ethnic name will be Taoiseach. How sweet a feeling this should be. But I can’t be excited about Varadkar’s impending coronation. Why does it have to be this politician?

Varadkar has not shown himself to be a great ally of migrants living here, nor does he appear to have much interest in Ireland’s significant racial issues.

In 2008, he argued for the deportation of the unemployed, asking: “Would there be a case at this stage for giving an offer to foreign nationals the opportunity to receive, say, three or four or six months of benefits, if they then agreed to repatriate to their country of origin and then forgo benefits beyond that?”

It was rhetoric that fed into the trite typecasting that people come to Ireland only to claim benefits, while also undermining all immigrants’ hopes of being accepted in their new homes.

Partial credit goes to Varadkar for his support of government pledges to accept refugees from Syria (albeit pledges, I would argue, that don’t go far enough in terms of numbers). He has called immigration “beneficial” to the economy and society, and has rubber-stamped measures such as exempting asylum seekers in direct provision from prescription charges. But Varadkar has also issued barbed, strange warnings of cultural differences.

Some welcome mat. I can’t find any historic evidence of refugees struggling en masse to integrate into Irish society. There have, though, been heart-warming reports of recently arrived Syrians harmonising with locals through social evenings, sport and other events.

Recently, Varadkar targeted social welfare fraud in a campaign that reinforces the suspicion that poor people, and not the ruling class, are to blame for Ireland’s economic woes. His entire Thatcherite leadership pitch has been to appeal to the well off, not Ireland’s most marginalised.

I approached Varadkar’s press office a few weeks ago hoping to speak about the Minister’s heritage and how it shaped his life and political. He was not available due to “diary pressures”.

Ireland must still front up to its race-related issues. Figures released last year by the European Network Against Racism showed a record number of racist assaults recorded in this country in 2015. Irish people of colour report race-based prejudice happening with troubling regularity.

Varadkar becoming Taoiseach won’t automatically solve these challenges. Ask anyone who thought Barack Obama’s election to the White House represented the beginning of a post-racial era in US society. The first Black president couldn’t absolve America of its racist history. During his time in office, racial inequality boiled over, spawning the Black Lives Matter movement.

On issues regarding race, we must remain battle-ready – united in a desire to make Ireland a place that’s inhospitable for racism or far-right doctrine.

I want to believe Varadkar will offer direct leadership in this realm. That his advance will more than just symbolic.