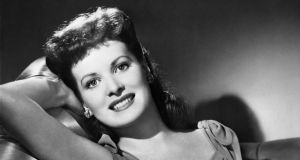 Maureen O’Hara, who died on Saturday, was Ireland’s first great Hollywood star and appeared in over 50 films.

Ranked among the world’s most beautiful women, she is best known in Ireland for her role as the headstrong Mary Kate Danaher in The Quiet Man - “the sexiest film ever made” according to the director John Ford.

He initially approached her to star in the film in the mid-1940s, but it was not made until Ford, O’Hara and John Wayne first agreed to make a western to satisfy Republic Pictures’ executives. The chemistry between Wayne and O’Hara that was apparent in that film, Rio Grande (1950), was even more in evidence in The Quiet Man (1952).

Her flaming red hair often led to her being cast as fiery-tempered characters and Wayne learnt that she did indeed have a temper.

Annoyed by both her co-star and director while filming The Quiet Man, she struck Wayne with great force in a fight scene.

“I really went for it. But he saw it coming and put his hand up. My hand snapped off the top of his fingers, and I broke a bone in my wrist.” Wayne complained that she had almost broken his jaw, and she assured him that that had been her intention.

However, the incident did not damage their friendship. He described her as “a real friend like a man would be - absolutely marvellous - definitely my kind of woman”.

She agreed that Wayne was wonderful to work with, adding that so also were most of her leading men, who included Henry Fonda, Tyrone Power and James Stewart. “They were strong and tough and I was strong and tough, so we were able to stand toe to toe together and we had great respect for each other. Because I wasn’t a delicate little female, we got on.”

She was born Maureen FitzSimons on August 20th 1920 in Ranelagh, Dublin, the second of the six children of Charles Stewart Parnell FizSimons and his wife Marguerita.

Her father, a businessman, was a co-owner of Shamrock Rovers football club, and her mother was a noted couturiere and an accomplished contralto.

A natural athlete, she excelled at sports. She also had a flair for acting and won many prizes at feiseanna.

At the age of 12 she made her broadcasting debut and within two years she was performing with the Dublin Operatic Society. Accepted by the Abbey School of Acting, she looked forward to a stage career.

However, a chance meeting with the film producer Harry Richman led to a screen test in London and to a seven-year contract with Charles Laughton. She had small roles in two British films in 1938, Kicking the Moon Around and My Irish Molly.

Laughton suggested that she should change her surname to O’Hara - to better suit cinema hoardings - and cast her as his co-star in the 1939 film version of Jamaica Inn, directed by Alfred Hitchcock.

”After that,” she recalled, “Laughton was contracted to do The Hunchback of Notre Dame in Los Angeles and I was very lucky that I, his protégé, should play Esmerelda.” Three indifferent films followed, but in 1941 she teamed up with John Ford to make How Green Was My Valley, which made her a star. Much in demand throughout the 1940s, she made her first technicolour film, The Black Swan, in 1942. Miracle on 34th Street, which became a Christmas classic, was one of four films she made in 1947.

Her athleticism enabled her to perform physical feats that few actresses would attempt, from fencing to fisticuffs. She insisted on doing her own stunt work.

Her third marriage, to Charles Blair in 1968, brought her much happiness. A former US air force colonel, Blair captained the last scheduled flight out of Foynes and was the first commercial pilot to fly into Shannon Airport.

The couple ran a commuter seaplane service in the Caribbean. Following her husband’s death in a plane crash in 1978, she took over the business, becoming the first woman president of a commercial airline in the United States. She also published a monthly magazine, The Virgin Islander.

She strongly disapproved of what she termed “permissive” films, describing them as “wrong, downgrading and bad”. And feminism was not really necessary. “Women were liberated the day they were born. Any woman can turn a man around her little finger. Even a little girl can do it to her daddy.”

She was coaxed out of retirement in 1991 to play John Candy’s domineering mother in Only the Lonely. She stole the show and was nominated for an Oscar. It was her last film and she bowed out of television in 2000.

A long-time resident of St Croix in the Virgin Islands, she was a regular visitor to Ireland and for a time kept a holiday home in Glengarriff, Co Cork. At her insistence the European premiere of Only the Lonely was held in Limerick, and she chose Adare for her 80th birthday celebrations.

She was in 1988 awarded an honorary LL.D. degree by the National University of Ireland. She was further honoured in 2004, both at the Galway Film Fleadh and by the Irish Film Institute.

Her autobiography ‘Tis Herself was published in the same year.

Her old age was marred by a dispute over power of attorney between her family and a former personal assistant, which was finally settled in favour of the family.

O’Hara was inducted into the Irish America Hall of Fame at an event in Wexford in 2011 and received an Honorary Award at the 2014 Oscars ceremony.

The scenic coastal home on 35 acres was placed on the market in October last year with an asking price of €2.3 million after O’Hara moved permanently to the US to be close to her family.

Her daughter Bronwyn survives her.