Make Ireland Great Again: ‘Our culture has been under threat since those dirty Celts arrived’

Broadside: We need to weed out any Celtic corruption in our bloodline 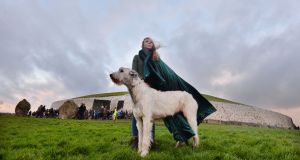 Noble, ancient Ireland: land of the Céide Fields, where our Neolithic ancestors created one of the oldest known complex agricultural systems in the world; land of Newgrange, where our forebears hauled rock and stone in concert with the stars, creating monuments many centuries older than the Egyptian pyramids. Great is our race. We are right to be proud.

Greatness is also a duty. We must take action lest Irish – like the giant elk we once hunted – cultures and peoples become extinct. For some years now, our indigenous culture has been under threat: diluted and even in danger of being replaced by foreigners arriving on our shores. It’s time for some vibrant public debate about the rot that has been setting in. I think we all know what I’m talking about.

That’s right: when those dirty Celts arrived in 500BC they corrupted our indigenous purity and led to the emergence of a mongrel mix: Gaelic culture. If we are to make Ireland great again, first we need to weed out any Celtic corruption in our bloodline. Be suspicious of anyone with red hair – a telltale marker of taint by the Celtic strain. Personally, I have already reported my brother Ciarán to our new and exciting National Party. I will miss him when he is deported to La Tène, but Éire first!

Next, there’s the problem of religion: strangers with scary belief systems incompatible with our own. Some do not even try to assimilate. Remember that conversion-mad fanatic in AD300 with his macabre death cult? Patrick or something. Worship none but the Tuatha Dé Danann, my compatriots.

When we have dealt with the corrupting forces of the Celts and the Christians, it’s time to atone for the ravages writ upon our race by rapine Vikings. Why have we ceased to celebrate their glorious eviction at the Battle of Clontarf in 1014? It is pathetic how ashamed of our heritage we have become because of political correctness. The 23rd of April should be declared a national holiday: Irish Racial Purity Day.

Yet Viking genes and culture did infiltrate ours over the centuries they skulked among us. Be vigilant against the continued usage of Viking words and phrases. (If you speak Irish, this will make it difficult to talk about seafaring.) And keep your eyes open. Are some of your neighbours a little too tall, a little too blonde, a little too attractive? Do not trust them. And we will need to burn Dublin, unfortunately.

You may have heard that the Normans who arrived at the behest of the traitor Diarmait MacMurchada in the 12th century gradually became “more Irish than the Irish themselves”. You might think that at least these foreigners didn’t dilute our indigenous culture. You’d be wrong. The Old English retained a keen sense of their Norman identity. Disgusting, isn’t it? Coming over here, marrying our chieftain’s daughters, taking our castles.

We need to oust these interlopers once and for all. Start scrawling “Out Normo Scum” on the doors of anyone named Walsh, Costello or Fitzgerald. Stop listening to Ray D’Arcy. And put down that Butler’s hot chocolate. I do not care if it is delicious.

As for the Protestant Ascendancy, installed by the British Crown in the 16th and 17th centuries, you can rename them the “Anglo-Irish” all you like but you’ll never convince me that there’s anything Hibernian whatsoever about the likes of Charles Stewart Parnell or Elizabeth Bowen.

At this point many of you may be thinking – when we get rid of the Celts, the Christians who won’t convert to worship of Dagda, Viking port towns, Barry’s tea, and the complete works of WB Yeats, who and what is going to be left?

We wouldn’t want to encourage further immigration to buoy our population levels. Sure, contemporary immigrants do all the jobs we think we’re too good for, prop up our economy so that we can continue to live in relative affluence, and - in a phenomenon called “brain drain” – bring valuable intellectual resources from their countries of origin, but they are a threat to our Daz white indigenous purity.

No, what we need to do is call some of the estimated 70 million people of Irish origin abroad home again. And, as we do so, maybe we could ask some other indigenous populations around the world – First Peoples in Canada, Aborigines in Australia, Native Americans in the US – what they think of the contention that Irish culture is under threat from immigrants.