Lives Lost to Covid-19: ‘At times you’d question if she had dementia she was that sharp’ 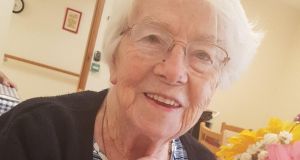 Maisie Byrne is remembered by her family and friends as a kind, humorous, loving, caring and strong woman who loved a good sing-song.

She was born on May 31st, 1935, in Rathvilly, Co Carlow. Maisie (nee Cummins) was the youngest of three children. When she was just six months old, her father died suddenly, and her siblings Peig and Jim were sent to her grandmother’s to be raised. She stayed with her mother, who remarried. Maisie went to school in Hacketstown, followed by the Sisters of Mercy on Baggot Street, Dublin.

As a young adult Maisie moved to London, where she worked in Greenways care home and a pub. She loved music and going to concerts; she went to the opera in Covent Gardens and attended an early Beatles gig.

At a dance she met her husband-to-be Christy Byrne, who came from Shillelagh in Co Wicklow, just 18km from where Maisie was born. A great romance bloomed between them that was to last their lifetime together, and they married on March 18th, 1961, honeymooning in Ireland.

Their first son, Christy, was born in 1964, and the young family moved back to Ireland in 1965. Two more children followed, Anne Marie (known as Carrie) and Michael.

The couple bought a house in Tallaght, on the road to Shillelagh, with easy access to the Dublin mountains, where Christy cut turf at the Featherbeds. While the children helped their father, Maisie would put a fry on out in the bog, to have sausages ready for them after their hard work.

Christy and Maisie loved socialising and dancing together. Maisie was a great neighbour and friend. She organised trips to the seaside for all the children on their road. She was an avid baker, making wedding cakes (including one for her son Michael) and Christmas cakes, scones, rhubarb and apple tarts, and potato cakes. She was also a skilled knitter, creating beautiful cardigans for her children and grandchildren Naomi (who works as a data analyst at The Irish Times), Kate, David, Ruairi, Danny, Jenna and Jude.

Her grandchildren say Maisie was happiest with a bowl of chicken wings (the spicier the better), a glass of Guinness and a Dublin Gaelic football or hurling match in the company of her family.

On September 15th, 2013, Maisie was left broken-hearted when Christy died.

Kiltipper Woods Care Centre became her home after she was diagnosed with vascular dementia three years ago. She made great friends there and loved the tea dances and sing-songs, and outings to visit museums, the Stella Theatre and Blessington lakes.

“Maisie had a wicked sense of humour. At times you’d question whether she had dementia she was that sharp,” says Kate. “When asked to name her three children she’d name her dogs (Jessie, Kim and Spot) just to annoy her children.”

Maisie contracted and beat Covid-19, but the virus left her weak and she died on May 1st in the care of the staff – including her grandson Ruairí – at Kiltipper Woods. This was a great source of comfort for her family and for her, as Ruairí could be with her and hold her hand.

Maisie was buried alongside Christy in Shillelagh on May 3rd, surrounded by her family. The sun shone as two songs were played, Bring Flowers of the Rarest by Frank Patterson, and Long Long Before Your Time by Johnny McEvoy. Her neighbours of Bawnville Road and Shillelagh held a minute’s silence, and Thomas Davis GAA club did a Facebook Live memorial as she was laid to rest.