Kevin Rowland: ‘I’m grateful for Come On Eileen, but don’t expect me to play it’ 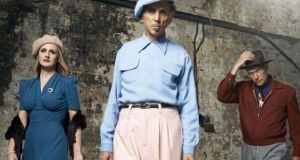 “I’m grateful for it, definitely. I mean, at the same time, I’m very careful not to live in the past,” says Dexy’s front man Kevin Rowland, about his band’s biggest hit, Come On Eileen.

Back in 1982, Rowland knew he was on to something special when he wrote the song. “I thought: wow, that’s just so right,” he told Róisín Ingle, presenter of the Róisín Meets podcast.

Nearly thirty-five years on, Come On Eileen still gets played on the radio, but Rowland said he rarely hears it unless somebody is trying to provoke him.

“I went to a funeral in Harrow where I grew up. It was a wake and someone put it on then. Some people do that if I’m there, they’ll put it on and then they’ll look at me and see my reaction,” he said.

Dexy’s have long since dropped the ‘Midnight Runners’ and have moved on with new material, so any fans still hoping for a revival tour need not hold their breaths.

“I went and saw one of those revival shows once and it was just nothing but depressing. I didn’t feel there was any respect for the artist or anything, it was just all about people reliving their memories. Again, nothing wrong with that, it’s just not my cuppa tea,” he said.

Last year the band released the album, Let The Record Show Dexys Do Irish and Country Soul, which included a cover of the ballad Carrickfergus. Rowland approached it as a method actor would a film role and inhabited the character of one the workmen immortalised in the song.

“Something happened when I went into studio to sing it. It’s like sometimes you get into a state of grace, it’s almost like you’re not doing it, it’s just happening. That’s what happened there,” he said.

In a wide-ranging discussion, Rowland also spoke about his former career as a hairdresser on the podcast. It was a job that he loved, he said, but it lost its lustre around the time that The Bionic Women began on British television and every second woman came in asking for a Farrah Fawcett haircut.

He also spoke about his parents who came from county Mayo and the time he spent there as a child, why he is not bothered that he is not rich, and said he feels, “more at peace these days than I ever have.”

Kevin Rowland plays a DJ set with DJ Dandelion at the Grand Social in Dublin on Saturday April 8th as part of the Music Town festival.

To listen to the full conversation between Kevin Rowlan and Róisín Ingle, go to iTunes, irishtimes.com/podcast, or your preferred podcast app.