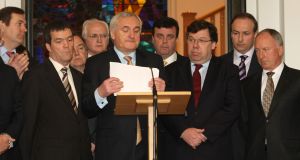 Far from casting the Fianna Fáil door wide open to welcome Bertie Ahern back after years of wandering, Micheál Martin’s strong statement on Thursday was aimed at ensuring the former taoiseach will never come knocking again.

Martin will hope that will be that.

But in Fianna Fáil and, more particularly in Dublin Central Fianna Fáil, things are never that simple.

Some party sources, both locally and in Leinster House, are unsure if Martin has actually seen Ahern off.

The only thing certain is that the relationship between the party leadership and the Ahern wing of the Dublin Central organisation has descended to new levels of bitterness.

Even after Martin’s intervention, some party figures believe it more likely that Ahern will bide his time and reapply to take up the membership he resigned following the publication of the Mahon tribunal report.

On Thursday, Martin, who had moved to expel Ahern, said his views on the man who first appointed him to Cabinet had not changed over the intervening 4½ years.

He cast Ahern as a figure from the party’s grubby past, and said he and his Fianna Fáil now “gets” that it must move on from that era.

The statement was met with gritted teeth in Drumcondra.

Chris Wall, Ahern’s long-term associate who tabled the motion inviting him to rejoin at a constituency event on Tuesday evening, said Martin is as much a part of Fianna Fáil’s past as Ahern, having served under him in Cabinet for over a decade. “He was part of that group,” said Wall. “Maybe it’s time for him to move on.”

Wall and Ahern maintain that there was nothing premeditated about Tuesday’s developments. The motion welcoming Ahern back arose from a discussion among two elderly members about how the party should strive for unity, says Wall.

Dublin Central has seen clashes in recent years between Ahern’s supporters and Mary Fitzpatrick, who ran for the Dáil twice and is favoured by Martin. Fitzpatrick gave a presentation at Tuesday’s meeting on her performance in February’s election, in which she failed to take a seat.

“Mary Fitzpatrick made a presentation on her outstanding performance in the general election, as she called it,” said Wall.

A discussion then followed on the need for party unity and one of the ladies who raised the issue, according to Wall, was an “outstanding Charlie Haughey supporter, Lord have mercy on him”.

“She would have paraded on her own outside Leinster House for Charlie,” he added. The second lady who spoke up was also a firm supporter and both were “stalwarts” of their parishes.

On foot of this, Wall says he proposed that Ahern be invited to rejoin Fianna Fáil. His motion was carried, but he maintains Ahern, who was out of the country, was oblivious – although Fianna Fáil figures around Leinster House are sceptical of this.

“I am waiting for him to ring me up and chaw the balls off me,” Wall added, and criticised Martin’s statement on Thursday as a kind of “censure”.

“Does that mean that any other people who want to join Fianna Fáil have to go through whoever the leader is?”

Wall, who said he knows Martin well, added that “several people” had said to him over the years that the Cork South Central TD was the “worst minster for health we ever had”.

“Why did Bertie appoint him?” Mr Wall said people would ask.

Martin cannot dictate that certain people are forbidden from joining the party, but Thursday’s statement made his feelings on Ahern clear. Ahern could push the matter, but it would cause division, say party sources.

It is understood that all membership applications have to be processed by two honorary secretaries. While they can be rejected at this level, the application can be appealed to the national executive and put to a vote.

Those in favour of Ahern rejoining emphasise his knowledge of Dublin politics and see him acting in an advisory role. They stress he has no intention of standing for any election again.

The prospect of Ahern rejoining has clearly been on constituency minds and has been a topic of conversation among local activists for some time.

One pro-Ahern figure said Martin is not heeding the wishes of many locals in Dublin Central. Another member feels it is “now inevitable” Ahern will rejoin, probably at a moment that will cause Martin the maximum level of discomfort.

Neither Ahern nor Martin will do each other any favours.

At a party meeting before the 2014 local elections, Ahern said of Martin: “I don’t think much of the leader, I think you all know that. I’m not going to say anything nice about him.”

Martin returned the favour on Thursday, but, despite that, many in Dublin Central will not give up on their man just yet.