Jennifer O’Connell: Drop the phone, look your child in the eye

‘Parent’ is no longer a noun. First it became a verb, and then a performance art 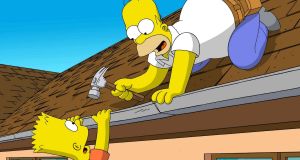 Homer Simpson: “The key to parenting is don’t overthink it. Because overthinking leads to . . . What were we talking about?”

The Oxford English Dictionary recently added more than 1,100 new words to its online edition. In an alarming sign of the times, more than 100 of these relate to parenting.

“Parent”, if you haven’t noticed, wasn’t always a verb. For, oh, roughly 350,000 years it was merely a noun, something you just happened to become as a byproduct of having children. Somewhere along the way it went from a state in which you passively shambled along, without too much angst or overthinking, to something you actively did. And then, in the past 20 or so years, it turned into an all-encompassing expression of your values and identity, a standard against which you could judge and be judged. A performance art. The world’s most successful cult. As such it demanded its own lexicon. The “newer arrivals reflect . . . developments in how we think about children and view their place in our society”, the OED lexicographers write.

So several of the new entries in their January 2018 update – harvested with the help of the parenting forum Mumsnet – are initialisms reflecting different parenting styles, including “AP”, which stands for “attachment parenting”, a practice that includes baby-wearing, long-term breast-feeding and co-sleeping. Then there are the terms “mommy blogger”, “helicopter parent” and “bed-sharing” – expressions that may sound benign to the uninitiated but are capable of evoking extreme reactions among parents.

Mumsnet proffered the ‘OED’ no fewer than 13 different suggestions for words related to faeces. Most popular among these was ‘poonami’

Several of the new entries relate to breast-feeding, including “pump and dump”, which refers to the process of getting rid of your breast milk, usually after a feed of pints, and “lactivism”, denoting the more vigorous end of the breast-feeding support movement.

Even people who are not parents get a separate entry in the OED. The word “non-parent” dates back to 1861, but it is only in recent years that people who had not reproduced came to be seen as a separate tribe in need of a distinct moniker and entry in the OED, as opposed to just, you know, as humans.

If parenting has become a performance art, many of my generation seem severely anxious about their performance. One of the more peculiar ways this has manifested itself is in a need to label the most banal and unpleasant aspects of their child’s existence. The OED reveals that the Mumsnet panel proffered no fewer than 13 different suggestions for words related to faeces. Most popular among these was “poonami”, the meaning of which is best left to your imagination. (Truly, we have entered a new age of enlightenment.)

There is no such thing as the perfect parent: good enough is actually good enough

At the very least all of this angst and overthinking is in danger of bleeding the joy out of having children. At worst it’s resulting in our raising incompetent adults, lacking in resilience and self-esteem. There is no such thing as the perfect parent anyway: good enough is actually good enough. With that in mind here are some of my favourite tips for good-enough parenting – in other words, for raising happy, self-sufficient kids without becoming a boring, one-dimensional zealot.

1: When you don’t know what to do, ask them
For those really sticky parenting conundrums turn to those at the coalface: your kids. Sometimes they’ll try to hit you up for Jelly Tots. More often they’ll surprise you with their maturity and self-control. The parenting expert Bruce Feiler says you should “enlist your kids in their own upbringing”, because it gives them a chance to build up their frontal cortexes.

2: That doesn’t mean negotiating with them on every little thing
You can say no.

3: Allow them to fail on their own terms
Know when to give your advice, then stand back and be on hand to pick them up when they fall. But do let them fall, or they’ll never learn how to land.

4: Put your phone away, look them in the eye, and have a conversation with them

5: Put them to work
A former dean of freshmen at Stanford University, Julie Lythcott-Haims, was so alarmed by the ineptitude of her students that she wrote a parenting book, How to Raise an Adult. “We absolve our kids of doing the work of chores around the house, and then they end up as young adults in the workplace still waiting for a checklist [and] they lack the impulse, the instinct to roll up their sleeves and pitch in,” she says. In case you’re worried about working them too hard, a chart by Maria Montessori did the rounds of Facebook a few years ago, showing what children should be capable of achieving at different ages. A three-year-old should be able to “dust baseboards”, she advised, while a six-year-old should be able to make a salad, and a 10-year-old should be able to deep-clean the kitchen.

6: Love them unconditionally, and let them know you do often
If they’re not embarrassed, you’re not saying it enough.

7: And when all else fails, just do number 6

It all reminds me of a quote from Homer Simpson, that oracle of underachieving parents everywhere. “The key to parenting is don’t overthink it. Because overthinking leads to . . . What were we talking about?”

Who's that lady? The extraordinary life of the Marchioness of Dufferin
8