Jackie Kennedy’s long and close correspondence with a Dublin priest gives a unique insight into the private life she so jealously guarded, which continued through the White House Years. 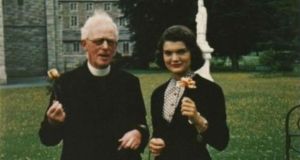 Letters written by the late Jackie Kennedy, wife of assassinated US president John F Kennedy, to an Irish priest have been withdrawn from sale. Photograph: Sheppard’s Irish Auction House

Letters written by the late Jackie Kennedy, wife of assassinated US president John F Kennedy, to an Irish priest have been withdrawn from sale.

In a statement this afternoon, All Hallows College said that the letters were “being withdrawn from auction” at the direction of the college and the Vincentian Fathers.

The statement also said that “representatives of All Hallows College and the Vincentian Fathers are now exploring with members of Mrs Kennedy’s family how best to preserve and curate this archive for the future.”

Sheppard’s Auctioneers in Durrow, Co Laois, which had been asked to sell the archive of letters on June 10th has not yet commented on the surprise announcement today.

The letters, extracts of which were published exclusively in The Irish Times last week, had been expected to sell for in excess of €1 million.

The deeply personal letters sent by Jackie to Fr Joseph Leonard were written between 1950 and 1964. Most of the letters are hand-written and their original envelopes.

The letters had been at All Hallows College in Dublin where Fr Leonard was a resident until his death in 1964. Last week, All Hallows said it was selling the letters because it did not have the resources to curate them.

On Monday an expert on rare books has handed into the Commercial Court copies made by him of the entire collection of letters.

Owen Felix O’Neill, with an address in Cahir, Co Tipperary, had copied the entire collection of letters and those copies will remain in a locked safe in the Central Office of the Four Courts pending the outcome of legal proceedings taken against him by MJ Fine Art Ltd, trading as Sheppard’s Irish Auction House, of Durrow, Co Laois, the court heard on Monday .

Is this the ‘best ever Paul Henry landscape’?
4